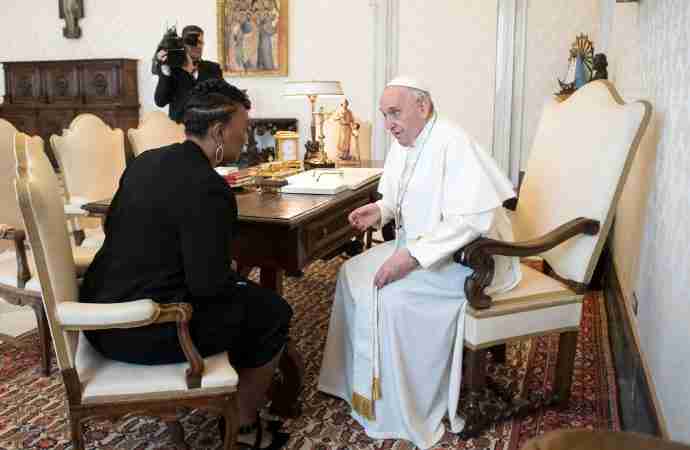 KING’S DAUGHTER: In Italy to receive a peace award, Rev. Bernice King was also able to meet privately with the pope to present him with papers written by her father, Rev. Martin Luther King Jr.

VATICAN CITY (AP) -The Rev. Martin Luther King Jr.’s surviving daughter had a private audience with Pope Francis at the Vatican on Monday.

The Rev. Bernice King presented the pontiff with the sixth volume of the civil rights leader’s published papers, subtitled “Advocate of the Social Gospel, September 1948-March 1963.”

A video of the meeting provided by the Vatican showed a smiling King greeting the pontiff, then speaking briefly through a translator, but no audio was provided. She tweeted after that the meeting was “(hash)lifechanging.”

Speaking later to the television outlet of Italian Bishops Conference, King called Francis “a leader and moral voice for the entire world.”

“The words that the pope recalled of my father, those which resonate in his heart, of peace, non-violence, respect for the dignity of every human being, the centrality of what is human, is truly crucial today,”

King said, according to an Italian translation provided by the station.

The 54-year-old King is the youngest child of Martin and Coretta Scott King and the chief executive officer of the King Center in Atlanta. She was five-years old when her father was assassinated. Her brothers, Martin Luther King III and Dexter Scott King are also still living, but their sister, Yolanda King, died in 2007.

King was in Italy to receive an international prize recognizing women involved in nonviolence and peace initiatives. The award was organized by the Gandhi Center in Pisa and Italian pacifist Rocco Altieri.

Events are being planned in the United States to mark next month’s 50th anniversary of King’s assassination. He was shot on April 4, 1968, while standing on the balcony of a motel in Memphis, Tennessee.

The King Center will hold six days of events. They include a cross-cultural act of kindness campaign, a peace prize award ceremony and a global bell ringing, starting at the King Center and the National Civil Rights Museum in Memphis.