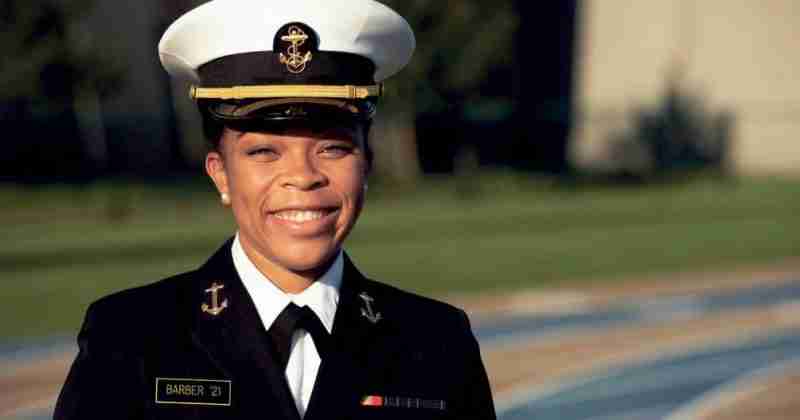 ANNAPOLIS, Md. (AP) – Midshipman Sydney Barber had her doubts about applying for the top student leadership position at the U.S. Naval Academy. A Black woman had never held the post in the 44 years women have been able to attend the 175-year-old institution. A Black academy alumna of another generation saw her potential. Navy Capt. Tasya Lacy, class of 1997, pressed Barber to apply. Next semester, Barber will become the ﬁrst Black woman to be the academy’s brigade commander.

The brigade commander represents about 4,400 midshipmen – future Navy and Marine Corps ofﬁcers – before the academy’s commandant. It’s a top leadership position that enables a midshipman to lead peers in achieving the goals of the brigade. The commander has a staff and helps academy ofﬁcials keep a pulse on the needs of the brigade. Barber compares it to a student government president at a civilian university.

“This was never something that I dreamed of,” Barber said, adding of Lacy: “She had no doubt in her mind that I was the right person for the job, and hearing her say that and being so conﬁdent in that, that really helped me to be more conﬁdent in myself.” DON’T SELF-ELIMINATE

Barber, who was selected for the position a few weeks ago, has achieved the milestone at a time of continuing national discussions about social and racial injustice – a debate that she says helped inspire her to step up.

“It’s deﬁnitely been a challenge and it’s deﬁnitely taken a lot of courage to … make this step, especially in this time of social disharmony, but these times bring a heavier calling, I feel,” said Barber, a 21-year-old mechanical engineering major from Lake Forest, Illinois.

Lacy remembers having doubts about applying for positions like brigade commander when she was a midshipman. Now an active-duty Navy captain, she said she learned “not to self-eliminate.” “Those were the words that I used when I talked to her, and I did tell her to reach for the stars and not to sell herself short,” said Lacy, who is now legislative director for the Ofﬁce of the Chief of Navy Reserve.

Barber, who aspires to be commissioned as a Marine Corps ground ofﬁcer, will be the 16th woman to be brigade commander at the academy. The ﬁrst, Juliane Gallina, held the position in 1991.

Similar ground was broken at the U.S. Military Academy in New York in 2017, when Simone Askew became the ﬁrst Black female ﬁrst captain, the highest position in the cadet chain of command at West Point.

Women were ﬁrst allowed into the nation’s service academies in 1976. That’s also when Janie Mines became the ﬁrst Black woman to enter the Naval Academy, graduating four years later in 1980. While the number of women at the academy has been rising, it’s still currently about 72% male and 28% female.

In a social media post, Mines wrote that Barber’s selection “brought me to tears. This young woman, Midshipman Sydney Barber, will be the ﬁrst Black Female Brigade Commander at the U.S. Naval Academy. 40 years later. Thank you, Sydney! Love you!” “GROWTH IS HAPPENING”

Lacy said Mines’ graduation paved the way for her, while Barber’s accomplishment will inspire more young women to both attend and seek top student positions at the academy.

“It is tremendously signiﬁcant because there are people who sometimes don’t aspire for certain jobs because they’ve not seen anyone look like them get into that job,” Lacy said.

Lacy volunteers in the academy’s sponsor program, through which people who live nearby welcome midshipmen to a home-away-from home for breaks, free of the rigors of academy life. She is Barber’s sponsor, and last fall she attended a ﬁrst-ever Black female networking breakfast students organized. Lacy also noticed other groups and activities promoting diversity that did not exist when she attended.

“So, as I see this, I know that growth is happening,” Lacy said. “Change is happening, and I’m ecstatic about it.”