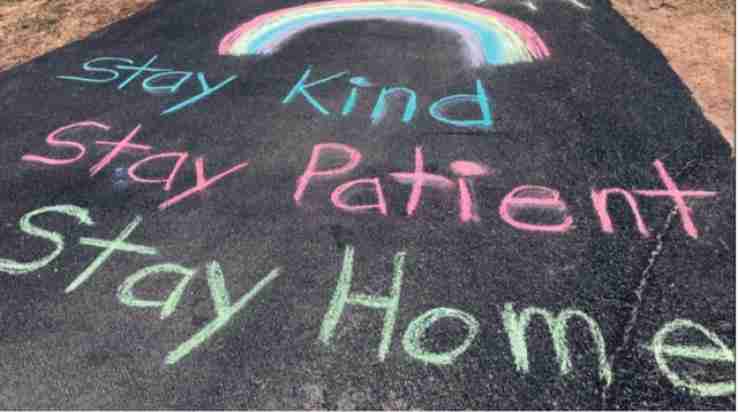 Cincinnati (AP) – Inspiration is contagious, too.

The coronavirus pandemic has brought an outpouring of messages from stranger to stranger – in windows, on front doors, across walls, and colored onto driveways and sidewalks.

Some messages offer encouragement “Strong Together.” “Always Look at the Bright Side of Life.” Others are spiritual: “Have Faith.” “Jesus Loves You Always.” Some offer humor: “United We Stand – 6 Feet Apart.” “Send Toilet Paper!” And there are rainbows. So many rainbows.

In Covington, Kentucky, 16-year-old twins Mallory and Kelly Glynn were toying around with colored chalk on their driveway, waiting for an idea.

“I saw all the chalk art people were creating all over social media and wanted to give it a shot, but wasn’t sure what to draw,” Mallory said by text message. She was checking Instagram and saw a chalk message on the page of Allie Clifton, who played basketball at University of Toledo and is a TV sportscaster in Los Angeles. It said: “April Distance Brings May Existence.” Mallory drew a map of Kentucky with that message below it, followed by hashtags: “TeamKy” and “TogetherKY.” Soon, people were stopping to snap cellphone photos of it to share with their friends. Neighbors smiled.

“I think it brightened their day just a little bit,” Mallory said.

In Homewood, Alabama, professional sign painter Shawn Fitzwater wanted to use his talents to lift spirits, and spent 10 hours covering a building wall with “We Are All In This Together.”

People were soon parking across the street from the sign to take photos and post them on social media, and an apparel company owned by friends put Fitzwater’s message on a T-shirt. Shirts were sold to raise money for BHMcares, a startup nonproﬁt group that’s assisting health care workers by providing them with meals purchased from struggling local restaurants.

“It’s kind of turned into something bigger than I ever expected,” he said.

The mayor of Dayton, Ohio, saw countless DaytonStrong messages during a turbulent 2019 in which the city endured a tense Ku Klux Klan rally, devastating tornadoes, a mass shooting in which 10 people died, and the fatal shooting of a police detective.

Nan Whaley said the slogans “Dayton United Against Hate” and “DaytonStrong” were more planned and organized than the personalized messages she’s seen that seem to be sprouting nearly spontaneously, such as “Hope Will Arise” in chalk and a window rainbow with “God Is In Control.”

“These are deeper, reaching out for connectivity,” Whaley said.

“This thing is particularly lonely and so it’s almost a shout of ‘Look, I’m putting myself out here and that makes me connected, and someone else will stumble upon it, and it will be meaningful to them.’”