Pope calls delivery of weapons, not food a ‘strange paradox’ 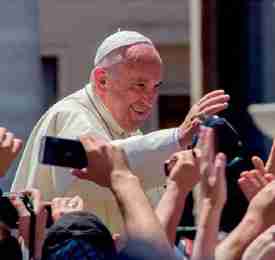 ROME– Pope Francis told workers and diplomats Monday at the U.N. agency that delivers food to crisis areas it is “a strange paradox” that food often cannot get through to those suffering due to war but weapons can.

Francis’ visit to the World Food Pro- gram was the first by a pope to the Rome-based agency that provides emergency food aid for 80 million people in some 80 countries in the world.

The pope has repeatedly drawn attention to global indifference toward refugees, the poor and the hungry, and has made food security one of the cornerstones of his papacy, previously visiting WFP’s sister organization, the U.N. Food and Agriculture Organization.

Francis said that while aid is often obstructed, weapons are trafficked freely.

“As a result, wars are fed, not persons. In some cases hunger itself is used as a weapon of war,” he said. “The death count multiplies because the number of people dying of hunger and thirst is added to that of battlefield casualties and the civilian victims of conflicts and attacks. We are fully aware of this, yet we allow our conscience to be anesthetized. We become desensitized.”

The message comes just days after WFP announced that it had delivered food for the first time since 2012 to the besieged Syrian town of Darayya, a suburb of Damascus, after receiving the Syrian government’s approval. The nine-truck convoy last week included rice, lentils, chickpeas, beans, bulgur, oil, salt and sugar, with enough wheat flour to feed the population of 4,000 for a month.

WFP noted that the government’s approval has permitted it to plan more convoys to the 19 besieged locations in Syria this month.

The pope noted another paradox that he has underlined previously, including during the FAO visit: that hunger persists despite a global surplus of food and widespread waste.

“Let us be clear. Food shortage is not something natural, it is not a given, something obvious or self-evident. The fact that today, well into the 21st century, so many people suffer from this scourge is due to a selfish and wrong distribution of resources, to the merchandising of food,” he said.

WFP’s executive director, Ertharin Cousin, expressed hope that the visit would help `’to build the public will that is necessary to end hunger” and that U.N. member states will “see that this is not just a necessity, it is a responsibility.”