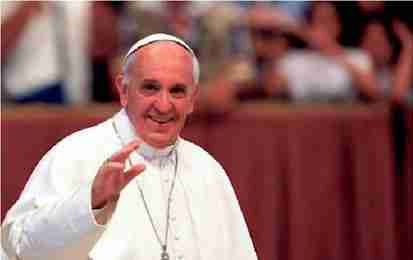 By NICOLE WINFIELD and ANTONIO CALANNI

BOZZOLO, Italy (AP) – Pope Francis made a pilgrimage to northern Italy on Tuesday to honor two 20th-century parish priests whose commitment to the poor and powerless brought them censure from the Vatican.

Francis flew by helicopter to Bozzolo, near Cremona, to pray at the tomb of Don Primo Mazzolari. Mazzolari, who died in 1959, was an anti-fascist partisan during World War II who, like Francis, preached about a “church for the poor.”

Afterward, Francis flew to Barbiana, near Florence, to pray at the tomb of Don Lorenzo Milani, a wealthy convert to Catholicism who founded a parish school to educate the poor and workers. He died in 1967.

Both priests were considered rebels in their lifetimes and were censured by Vatican authorities for their writings. By honoring them with his brief visit, Francis sent the church a message of the type of priest he wants today: simple, guided by Gospel values, devoted to the poor and uninterested in careerism.

At his first stop, Francis stood in silent prayer before the simple tomb of Mazzolari, who is considered now to be “Italy’s parish priest.” He then delivered a lengthy tribute to the priest, quoting Mazzolari’s writings about the need for the church to accompany its flock that Francis himself could have penned.

Francis said Milani taught the importance of giving the poor the capacity to speak up for themselves, “because without the word, there’s no dignity and therefore no justice or freedom.”