Program provides those freed from prison with lodging, hope 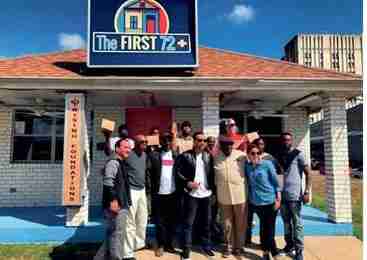 PHOTO COURTESY OF THE FIRST 72 PLUS

NEW ORLEANS (AP) – Parking in downtown New Orleans, Troy Rhodes was struck by the adjustment he now faced. The 50-year-old knew after 15 years in prison, he’d have to adapt to the outside, he said. The end of the journey from Angola to New Orleans made that much clear.

A federal judge had ordered Rhodes’ release on May 31 and vacated his 2003 conviction and 149-year-sentence for armed robbery and attempted murder. His attorney drove him from Louisiana State Prison to New Orleans that Thursday, stopping first at her Central Business District office.

She parked on the street.

“When I left, they had meters that you used to put the coins in and turn the little knob,” said Rhodes, a neatly dressed man standing no taller than 5-foot-6, with a soft, measured voice. He swiveled his head, he said, looking for the waist-high, metal devices. “They had this machine in the middle of the block. It was so different.”

Getting out of prison meant he got to see the renovated Mercedes Benz Superdome in person after years of watching his New Orleans Saints play there on TV. It meant he could hold his wife’s hand as they watched a movie without dreading a guard’s signal that it was time for her to go.

It meant he could taste the warm bell peppers his daughter stuffed with ground meat and shrimp.

Getting out also meant he needed a place to stay, a way to get around and opportunity to make some money. That’s where The First 72+ came in. Instead of 85 roommates in a prison dormitory, Rhodes now shares a room with one man, another formerly incarcerated person, at the organization’s three-bedroom Perdido Street house.

Rhodes showed off his bedroom in the back of the house, one of two houses where The First 72+ is headquartered, in the shadow of the Orleans Justice Center jail in Mid-City. He took a seat on the edge of his twin bed, his feet barely touching the floor. “I’m sleeping peacefully now,” he said.

The name, “The First 72+,” is a nod to the critical three-day period for those fresh out of prison. Once you get out, said Daniel Tapia, a field mentor for The First 72+ residents, “reality starts smacking you in the face.”

Tapia, 33, grew up Uptown, from Central City to Hollygrove, He served a dozen years in prison himself, and helps The First 72+ residents in any way he can. That includes securing transitional housing and helping them find jobs.

Many people released from prison after long sentences have nowhere to live. Their family may have left town. They may have burned too many bridges. Their relatives may be involved in activities that threaten their parole status. The newly-released are tasked with finding a job with a hole in their job history, a felony record and without clothes or transportation.

“When you come home and you go back to your old neighborhood or whatever, there will be people that know you and they’re going to be willing to give you an opportunity. It’s an illegal opportunity, it’s going to be something that could get you in trouble,” said Tapia, his arms covered in tattoos, a gold chain attached to a prayinghands charm hanging around his neck.

“If you feel like the door is closing on you in other ways, people just kind of revert back to what they know, just for survival reasons.”

The First 72+ and its companion organi zation, Rising Foundations, provide an alternate support system – one Tapia says is critical in those first few days after release from prison. The background of the board and co-directors, all of whom are formerly incarcerated, has been critical to the success of the program, according to its organizers.

“Those close to the problem are close to the solution,” said the Rev. Tyrone Smith, the pastor at Next Generation of Original Morning Star Full Gospel Baptist Church who cofounded and runs daily operations of The First 72+ with his brother, Ben Smith. Many years ago, each brother spent time at Angola.

The rate of people leaving state prisons is going up as a result of last year’s Louisiana Justice Reinvestment Package. Organizations like The First 72+, which does not receive state funding, provide vital services to help those being released reacclimate to society and steer them away from reentering the criminal justice system.

The program typically offers housing to its residents for three to six months. Rhodes’ stay at The First 72+ is one of the conditions of his bond. U.S. District Judge Jane Triche Milazzo released him on bond after vacating his conviction, ruling his counsel was ineffective at his 2003 trial.

Living without overhead, and with access to services that ensure a judge that Rhodes will have a smooth transition into society, “means so much,” Rhodes said.

Blair Boutte, a local bail bondsman who sits on The First 72+ board of directors, donated the two houses that make up the residence and the office space. The program administrators still knock on the front door before letting themselves into the home, Smith said, to make the residents feel a sense of privacy that they lacked in prison.

Meals, activities, your whole schedule is planned out in prison, Smith said. He couldn’t guess, he said, how many times he has had to walk behind residents as they left rooms to switch off the lights, reminding them they have control over lighting now and bills must be paid.

Some days at The First 72+ and Rising Foundations headquarters, “I walk around like a chicken without my head,” said Tapia, who also manages cases for a courtaffiliated re-entry program administered by Rising Foundations.

The organizations’ staff, a mixture of social workers, formerly incarcerated people, grant-funded interns, a lawyer and a law student, spend most days putting out a series of small fires to make sure their clients have the best opportunity for a smooth transition with the ultimate goal of long-term stability.

“We try to keep this room staffed with helpful people throughout the day,” said Kelly Orians, who cofounded Rising Foundations and works closely with The First 72+. “Just walk in, and someone will have a computer and problem-solving skills, and think about how to solve it.”

Among the tasks staffers helped their formerly incarcerated clients complete during a reporter’s recent visit included driving them to get their driver’s licenses; providing $25 Walmart gift certificates to buy clothes; obtaining a bus pass; finding single occupancy affordable housing; offering leads on jobs; filing affidavits to reclaim property seized by the police; mitigating parole fee disputes and pay schedules; and vouching for a client in court.

“I drove without a license for 20 years,” said Lee Marshall, a 56-year-old formerly incarcerated man who became a resident at The First 72+ after knocking on the door one day and asking if they had room.

Before he went to prison for a heroin-related conviction, Marshall said, he was a drug addict and often had outstanding warrants or attachments for his arrest. When he got pulled over, a valid driver’s license was the least of his worries. “I was a bad act,” Marshall said of his former self.

Shortly after joining The First 72+ program, Ben Smith took Marshall to the Office of Motor Vehicles for a driver’s license. The staff helped him “get online,” Marshall said, and open a bank account.

Marshall sat on one of the two couches in The First 72+ living room while the TV played a true crime show and spread out his self-help books on the tile floor. He explained the change he experienced in prison that set him on a path to reform.

“When you’re in the hole for three months, you count the bricks on the wall and you start thinking about things you haven’t thought about in a long time … a lot of talking to God, soul searching,” Lee said.

He took those moments to ask for forgiveness, he said, and he forgave those who hurt him.

Michael Harvey, another resident who sat on the other couch, laughed as Marshall stopped preaching and excused himself to leave. Marshall’s ride to a house painting job had just arrived.

“He’s a good person,” said Harvey, referring to his roommate of about a month. “He love to talk.”

Michael Harvey has lived in two places in his 61 years: New Orleans and Angola. The state released him from prison May 7 after 19 years and four months, he said, so he came back home. He grew up in the Desire housing projects, but his family left the city after “Hurricane Katrina swept them away,” he said.

Adjusting to life in a house of five roommates can be tricky, “like when you’re a little boy, and everybody don’t see everything the same,” Harvey said. But they work out their differences well, he said, and he has been floored by the generosity those at the organization have shown him.

“Better than living in a dorm with 86 people, I can tell you that much,” said Harvey, who got a job weeks after his release setting up for banquets at a downtown hotel.

Sitting on a bench of The First 72+ porch, Rhodes pointed to a man and shouted, “Domino!” It was another friend from Angola, Frederick Domino, whose father is a first cousin to musician Fats Domino. Rhodes hadn’t seen him since they were in prison. Domino, 62, had come that day for help settling a dispute about parole payments.

“Man, you look good … big ol’ smile on your face,” Domino shouted, before pulling Rhodes in for a hug.

It feels good seeing people he knew from the inside doing well on the outside, Rhodes said. The smile Domino pointed out, the one that seemed stuck on Rhodes’ face since his release, came from the peace he feels inside, he said, “a peace I’ve been waiting for, for so long.”