READING THE SIGNS of the Times 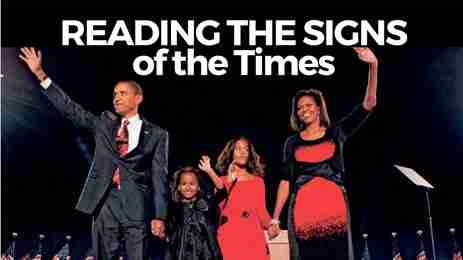 In the presidential elections of November 2008, if you were “reading the signs of the times,” you sensed a shift in our society. History was made that night when the first African American man was chosen to take his place in the Oval Office following its occupation by 44 white men.

The night was electric when Senator Baraka Obama became the first black President of America. When he and his wife Michelle accepted the responsibility of becoming the First family; it seemed finally there was unity in America. In actuality, his election brought us more division.

“Do you think (says Jesus) I came to bring peace on earth? No, I tell you, but division.” Luke 12:51 (NIV) We are all asked to think about these words and what Christ meant by them.

In the above passage, Jesus calls us to always ‘read the signs of the times.’ Why? Because Christ wants us to grow daily, and here He reminds us that growth often leads to a division that can wreak havoc in our lives, as we know it.

Christ also reminds us that this is why He came, “I’ve come to start a fire on this earth—how I wish it were blazing right now! I’ve come to change everything, turn everything right side up— how I long for it to be finished! Do you think I came to smooth things over and make everything nice? Not so.

‘Reading the signs of times,’ one could feel the enormity of that historic moment on that November night in 2008. America appeared to grow that night and in the twinkling of an eye the whole world cheered for us. Suddenly many believed the country was entering a new era in race and political relations.

While some called the moment ‘post-racial America,’ many doubted its arrival. And others (like me) thought regardless of whether one believes the country had progressed beyond its racial fixation, we all know something changed that night!

‘Reading the signs of the times’ almost eight years later and it feels we’re in for another seismic shift in November. The question now is will the shift be another historic moment with the election of a female president; or another white male with a tongue infamously known for being uncontrollable?

We do ourselves a huge dis- service when we know what we should do but neglect doing it. The greatest ignorance is to know what Christ wants, and not do it because we think our voice too small or that one vote won’t count. So many stay home and fail to vote in national or those all-important local elections under the mistaken guise that it’s O.K. to do nothing.

We can ruin society with such ignorance and stupidity. But thank God the church cannot and will not be ruined, nor can any fruitful part of Christ’s body perish; but says Jesus on many occasions, we can expect the unfruitful will be cut off and cast into the fire.

According to the Book of Rev- elation, ‘reading the signs of the times,’ means our redemption is near, and this should demand our attention. We can serve Christ by caring for His people. We show we care by tending to His vineyard, for He who have redeemed us, now calls us to be fruitful, faithful and productive and not to fall back into old ways.

This is the struggle of both people and our churches; to grow in faith, and spiritually. Growth brings greater challenges which requires greater faith; more faith than what was had and needed yesterday.

But making this gospel truth known to one and all is hard, because this, too, leads to division. Because it stirs people up, even the people in our own household, suddenly they too can become the enemy. Yet through effective preaching, sinners can be saved and converted, and through Christ, God can and will be glorified.