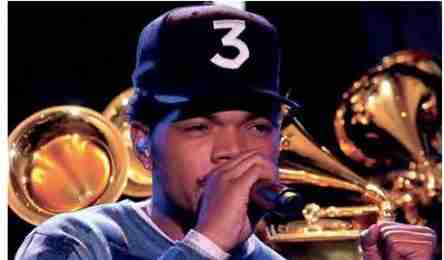 From the depiction of the divine mother in Beyonce’s imagery to Busta Rhymes’s jab at President Trump’s “Muslim ban,” religion took center stage at the 2017 Grammy Awards.

As he accepted the first award – for best new artist – of the televised broadcast Sunday (Feb. 12), Chance the Rapper declared:

“Glory be to God. I claim this victory in the name of the Lord.”

Later, he exuberantly performed his songs “How Great” – featuring the chorus of Christian artist Chris Tomlin’s “How

Great Is Our God” – and “All We Got” with Kirk Franklin, Tamela Mann and a white-robed gospel choir.

A Tribe Called Quest also referenced religion and politics in their performance of “We the People,” joined onstage by Anderson .Paak, Consequence and Busta Rhymes. Rhymes thanked President Trump for his “unsuccessful attempt at the Muslim ban” as performers, including a woman in a hijab that knocked down a wall constructed onstage.

But perhaps the performance richest in religious imagery was Beyonce’s, which evoked iconography of the divine mother from several faith traditions.

A number of viewers on Twitter pointed out the pregnant singer’s likeness to the Yoruba goddess Oshun as she performed “Love
Drought” and “Sandcastles.” Oshun is associated with fertility, beauty and love, among other things, and is pictured wearing yellow.

The halo-like crown of stars and flowers and the veil she wore also evoked the Virgin Mary – specifically, depictions of Mary, Queen of Heaven, and the Virgin of Guadalupe – in Catholicism.

And special effects made it appear at one point that Beyonce had many arms, mimicking Kali, a Hindu goddess who has been worshipped as the Divine Mother and Mother of the Universe.

Others noted references to the African diaspora water goddess Mami Wata; the Roman goddess of love and beauty, Venus; and Yemoja, the Yoruba patron diety of women, and especially pregnant women.

Emily McFarlan Miller is a national reporter for RNS based in Chicago. She covers evangelical and mainline Protestant Christianity.