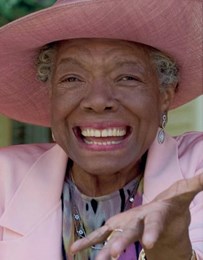 NEW YORK (AP) – Put a handle on it. If you don’t know what that means, you might not call elders by “Mr.,” or “Miss” or “Mrs.,” or insist that your children do the same, or demand it for yourself.

If you’ve heard the term, you’re likely familiar with the history of the politics of respectability and what that means to some African-Americans, pro and con.

Are you from the North or the South? A small town or big city native? From a religious, school or immigrant community that uses elder honorifics? Perhaps you’re Professor, Doctor or Judge.

All of the above were widely debated on social media last week, focused on an old talkshow clip of the late Maya Angelou sharply chiding a young woman for addressing her as Maya rather than Miss Angelou before asking the poet and memoirist for her views on interracial marriage.

“I’m not ‘Maya.’ I’m 62 years old. I have lived so long and tried so hard that a young woman like you, or any other, you have no license to come up to me and call me by my first name.

That’s first,” she said to claps from the audience. “Also, because at the same time, I am your mother, I am your auntie, I’m your teacher, I’m your professor. You see?”

Angelou, who was black, apologized later in the show to her questioner, also black.

Pierre Phipps, who tweeted the snippet, has heard from all sides since then and said opinions are varied and plentiful. After his March 14 tweet sent Angelou’s name trending on Twitter, Phipps said the Kim in the clip reached out.

Turns out she’s Kim Watts, 49, an educator in the San Francisco Bay Area. Watts told The Associated Press by phone Wednesday that she doesn’t have a Twitter account but friends and family alerted her to the hubbub. She said she was a 20-year-old college student in 1989 when she went on a class trip to San Francisco to sit in the audience for a taping with Angelou of the talk show “People are Talking.”

“Her response threw me off. It was a little awkward for me, but at the same time it was like, oh my God this is Maya Angelou,” Watts said. “I remember feeling like, oh my gosh I insulted one of my icons, a person I look up to.”

Watts said she got a kick out of people new the clip thinking she was still a teen.

The 29-year-old Phipps, whose Twitter handle is (at)PrinceCharmingP, can’t remember where he found the vintage exchange when he tweeted it out with: “I can’t wait to turn 30 so I can read one of yall for calling me by my first name like this:”

He told the AP in an interview that he was surprised at the attention the tweet has received, especially among young people who disagreed with Angelou. She died in 2014 at age 86, and also favored the title Dr. in light of her numerous honorary doctorates.

“They think Miss Angelou’s response was very elitist. They were really, really pissed about it,” said Phipps, who lives in Los Angeles and writes for television. “We’re living in progressive times and a lot of people said once they turn 18, they feel like they have an even platform no matter how old you are. History is no longer playing a part in how we go about our everyday lives. History is becoming history.”

Phipps grew up in Chicago, but he has plenty of older female relatives from the South, including Mississippi and Alabama.

“It’s an unwritten rule on respect for elders in which a lot of us were born and raised to ‘put a handle on it,’” he said. “Me personally, coming from a strong black Southern family, I didn’t see anything wrong with her response. Everyone is raised differently.”

Watts, who was adopted as a child by white parents, said she was not raised with the courtesy title tradition or practice for elders in her life.

“I wasn’t thinking about that in the moment,” she said of her encounter with Angelou. “I like that this conversation, though, is focused on respect. Given my age now, I can see both sides of it.”

Carrie Salow is a 55-year-old mother of two girls in Phoenix, where she moved from Grand Rapids, Michigan, when she was 15.

“I absolutely expect my teen daughters to call their friends’ parents Mr. and Mrs., and I expect the same,” said Salow, who is white.

“The kids who live across the street from us are now young adults, in and out of college. They still call me Mrs. Salow and I feel it is appropriate.”

Valencia Bey, 49, was born and raised in Chicago and now lives in nearby Oak Park, Illinois. She spent most of her summers in Shelby, Mississippi, with her maternal grand. “You just did noy call elders by their first name,” said Bey, who is black. “I was taught by folks who felt the way Ms. Angelou did.

Addressing someone as Mr. or Miss was a sign of respect, especially those who came from the Jim Crow South, where calling a grown black person by their first name was a sign of disrespect. White people would purposely not call them Mr. or Mrs. or Miss to reinforce that they were considered inferior.”

Against the backdrop of African-American history, such honorifics are heavy indeed.

“Like Angelou, our elders have lived lives some of us can only imagine, especially if they grew up in a society that was founded on white supremacy,” wrote Britni Danielle, in a piece about the tweet at Essence online.

“Often times, they weren’t given the respect they were due by the outside world, which regularly sought to humiliate and dehumanize them at every turn. Those who did dare speak up and demand their propers did so knowing the price could be steep,” she wrote.

The 55-year-old Lucy O’Donnell, with a nearly 18-year-old daughter and a 21-yearold son in Los Angeles, was raised in Arlington, Virginia.

“Two of my daughter’s friends initially addressed me as Mrs., and I have to say I hadn’t even given it a thought until then. I told them that they were welcome to call me by my first name but that if it was important in their households to address adults more formally that was fine, too,” said O’Donnell, who is white. “Both switched to Lucy pretty quickly. The only tradition I can’t abide is Mrs. and a husband’s first and last name.”

Danielle acknowledged young blacks responding to Phipps’ tweet who thought Angelou was out of line, writing:

“We live in a time where some people don’t really value the things and people who came before them. That’s how we get shirts declaring, ‘I’m not my ancestors,’ or people looking to cancel dead Black writers like Angelou because they do not like an answer they’d given decades ago without understanding the context of the times.”

Previous post SHAQ COMING BACK TO MIAMI TO PLAY: MUSIC