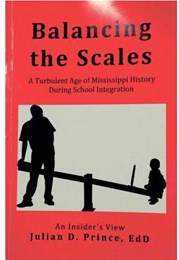 TUPELO, Miss. (AP) – Whether his audience is a large group or a single listener, Julian Prince speaks with precision and passion, especially if the subject is the desegregation of Mississippi schools.

Prince was, after all, a key player in this important part of his state’s history.

And now the 91-year-old retired educator has told his story in a book, “Balancing the Scales: A Turbulent Age of Mississippi History During School Integration.” Why now?

“I thought an accurate story from an insider’s viewpoint needed to be written about school desegregation,” he said.

And who better to tell the story than someone who saw the arduous process – often tinged with violence and fear – to fruition in a small but important corner of the country?

The literary seed was sown, so to speak, after Prince was asked to be part of a four-person panel discussion on a National Public Radio program in 2004 commemorating the 50th anniversary of Brown v Board of Education of Topeka.

This was the 1954 landmark Supreme Court case in which the justices ruled unanimously that racial segregation of children in public schools was unconstitutional.

“The invitation to be a panelist surprised me,” Prince said. “And after the program, Justine Kenin, who organized the whole thing for NPR, said to me, ‘Your story is so interesting; why not write a book?’”

After giving Kenin’s question some thought, Prince decided perhaps he did, in fact, have a story he ought to tell. And so he wrote a draft.

“I never tried to publish it,” he said. “I put it on file in the library at Ole Miss.”

That changed when a grandson who was being home-schooled asked his grandfather about desegregation.

“He knew nothing about it,” Prince said.

Prince found a copy of his manuscript draft in his computer; his son David signed on to help his father complete his memoir; and now there are published copies of “Balancing the Scales” to enlighten those who are either completely in the dark regarding desegregation or just need a refresher on an important part of history.

Why “Balancing the Scales?” “Black education was in such a bad state in Mississippi,” Prince said. “I eventually came to the point of view that the only way we were ever going to equalize education was to put all children in the same school building with the same teachers and the same curriculum.”

It was a plan that was certainly easier pronounced than put into practice. But it did eventually happen.

Prince grew up in the Mississippi Delta, in Greenwood – “the most segregated section in America.”

“As a child, a black family of sharecroppers lived out in back of our house,” he said. “My best friend was the son of this family. Lewis and I played together for years. Certainly, partly because of this friendship, I had a different attitude about black people.”

When he was 14, Prince not only lost his father to suicide, but it was the young boy who discovered the body.

Teachers at Greenwood High School rallied around Prince to help him get over the trauma.

“I can’t describe how good they were to me,” he said. “It’s what made me want to be a teacher.”

While a student at Millsaps College, Prince, a biology lab instructor, met a Belhaven College student who was taking a summer science class at Millsaps.

“She couldn’t find anything under the microscope, so I got to get up close and help her,” Prince said laughing.

They couldn’t date while she was a student, but in the fall, Prince asked her to a movie. When she got on the bus to head back to her school, he told her he was going to marry her.

“She looked at me and said, ‘Whatever made you think I’d marry you?’” Prince said. “I knew I had some work ahead of me.”

Today, the Princes have been married 70 years.

After their first home in married student housing at Millsaps, the couple moved to McComb where both had teaching positions in still-segregated schools.

Prince spent 11 years in McComb: four years as a teacher, six as a principal and in his 11th year, director of instruction.

“I had never been in a black school before,” he said. “It was probably the worst experience in my life. There were no shades on the windows; the books were all hand-me-downs and 10, 12, 15 years old; there were inadequate desks; and one pencil sharpener for 400 children.

“In a 5th-grade class, there were children who had no pencils, and those who did just scribbled on paper. How did students get to the 5th grade if they were totally illiterate? I realized I was supposed to equalize that. Can you imagine? I found a mess. Disorganized, the height of despair.”

Prince challenged McComb’s civic and educational leaders as they began the arduous task of equalizing the unfair system.

At the age of 32 in 1960, Prince left McComb schools in the hands of others and accepted an offer to become superintendent of schools in Corinth.

He spent five years as Corinth superintendent before McComb came calling – again, when in July 1964, President Lyndon Johnson signed into law the Civil Rights Act which would put an end to segregation.

“I had no intent of going back to McComb, ever,” Prince said.

But as history has it, the couple did go back, with Prince serving, this time, as superintendent.

“I told them I’d come back on one condition,” Prince said. “The board had to agree to voluntarily desegregate the McComb schools.”

While the Princes had been in Corinth, McComb had become known as the “Bombing Capital of the World,” with its African-American residents poised to become full-fledged citizens with long-withheld voting rights, and the Ku Klux Klan fighting any sort of advancement for African Americans every step of the way.

But Prince had always had a plan and he went to work building committees made up of blacks and whites to work together as a community.

While superintendent, Prince also taught science in the classroom because he wanted to be in school every day.

“I had this revelation that what my job was to teach the young people how to get along,” Prince said. “We had to produce a new culture, and the young people agreed to go with me in this process of trying to build a new society.”

When Prince left McComb the second time 11 years later to accept the job as superintendent of Tupelo schools, McComb School District had some of the best schools in the state, Prince said. There were a few other stops on his professional journey after Prince left Tupelo. When he retired at 68, he returned to Tupelo – “where I wanted to live.”

Today, Prince spends his time enjoying life. “Balancing the Scales” is the latest of several books he’s written. He also loves to work in the yard and still does his own mowing and trimming.

Next post Highway named for Mississippi lawmaker who died in 2015