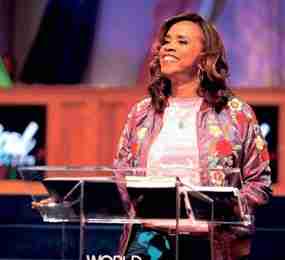 Taffi Dollar speaks on the topic of Bible-based gender equality during her Radical Revolution Women’s Conference in New York City.

COLLEGE PARK, Ga. – As countless women declare “me too” in the wake of allegations of abuse by men in positions of power, a long-time ministry leader is finding a warm reception for her message calling for an end to unequal standing between the sexes.

Taffi Dollar – who helped her husband, Creflo Dollar, build World Changers Church International (WCCI) into a 30,000-member congregation with fellowship churches around the world – is challenging attitudes that have kept women from realizing their full potential for too long.

Following two successful 2017 conferences that addressed Bible-based gender equality and the well-received book, “Gender Roles,” which was just released in a Spanish edition, Dollar has announced plans to continue championing the topic in 2018 with another conference and book.

“Let Them Have Dominion,” the followup to “Gender Roles,” will be released during the 2018 Radical Revolution Women’s Conference, set for March 15-17, 2018 at the World Dome in College Park, Ga.

The featured musical guests will be Tasha Cobbs and Micah Stampley.

Since attending a CBE event in South Africa several years ago, Dollar has focused much of her ministry on what she calls “restoring the God-ordained balance and equality in our Christian families, churches and communities” where women share leadership roles equally with men.

In one section of “Gender Roles,” the Dollars write jointly about how their understanding of the Bible’s teachings has changed their marriage from one in which it was solely the man’s responsibility to lead and guide the household to a mutual partnership where “we exchange our weaknesses for each other’s strengths.”

“The message has not only resonated with women. … We’ve also heard from men all over the world who have said it was liberating for them to realize they do not have to take on all of the responsibilities associated with leadership by themselves,” said Christopher Spence, executive director of Taffi Dollar Entities.

While “Gender Roles” focuses mainly on equality between the genders, Dollar’s next book and the 2018 Radical Revolution Women’s Conference will look more broadly at the issue of equality, including issues of race and ethnicity.

Though Dollar’s message was being developed before the recent abuse scandals and race-related flash points gained the world’s attention, it is now “very timely,” Spence remarked.

“We believe it’s important to provide a light in the darkness and share how biblical equality says that we are all equal before God. The fact that we are of different races, ethnicities and genders should have no bearing on the respect that we are all afforded as children of God,” Spence said.

In addition to co-pastoring with her husband, Dollar leads WCCI’s Radical Women’s Ministry as well as Prestige Ministry, an outreach to women caught up in human trafficking and the sex industry. As the founder of Arrow Records, she oversees an independent label that has sold more than 300 million units.