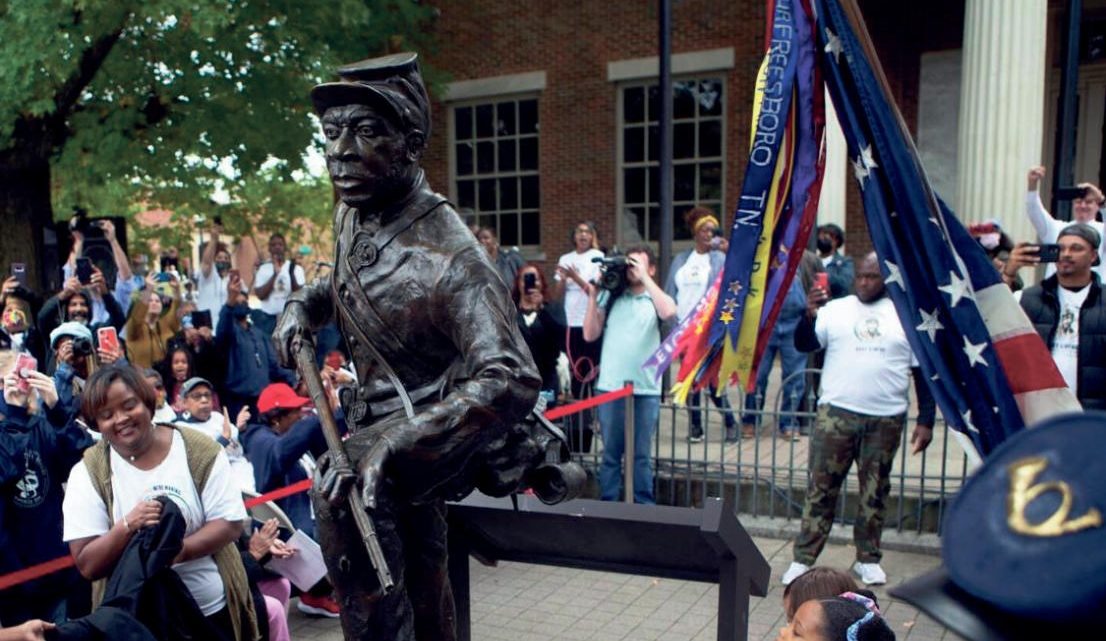 Franklin, Tenn. (AP) – Four years ago, a deadly white supremacist riot in Charlottesville, Virginia, led pastors in the Tennessee city of Franklin to call for the removal of a Confederate monument in their town square. A lawsuit and political maneuverings made that impractical, but a local leader of a Civil War history nonproﬁt had a different idea.

Instead of taking the statue down, a new statue and historical markers could be erected to tell a fuller story of the Civil War – one that included the horrors of slavery and the Black people who fought to end it.

That effort led to the unveiling this weekend of a statue, titled “March to Freedom,” honoring the Black enslaved men who enlisted in the United States Colored Troops, a segregated part of the Union Army during the Civil War, The Tennessean reported. It stands at the foot of Franklin’s historic courthouse, directly across the street from a monument to Confederate soldiers known as “Chip.”

Battle of Franklin Trust CEO Eric Jacobson, who is white, initially floated the idea of the Fuller Story project, to add the history of Black Americans to the town square.

Pastor Hewitt Sawyers, who grew up in the Jim Crow era at a time when Franklin’s Public Square was not welcoming to Black people, eventually became one of the leaders of the project, but he had to be convinced.

Since his childhood, Sawyers had avoided downtown Franklin because it meant seeing the Confederate statue, he said during a Thursday panel discussion. He believed that the statue needed to come down, but talks with Jacobson “changed my heart about that,” Sawyers said.

“It’s not a statue of Robert E. Lee or someone like that, it’s just saying that Confederate soldiers died, and it’s just giving them honor for ﬁghting in a war,” the pastor said.

The Rev. John Haynes of Burns Tabernacle Baptist Church remembers Ku Klux Klan rallies on the square in the 1980s, in the shadow of the Confederate monument. It was part of what made his relationship to the public square “bitter,” he told The Tennessean recently.

Speaking at the unveiling on Saturday, Sawyers said the square had always been a reminder of how he was conditioned to think.

TO KNOW MY PLACE

“I was conditioned, in other words, to know where my place was,” he said. The new statue was unveiled during an emotional ceremony attended by hundreds of people. It is one of the few standalone monuments honoring the hundreds of African Americans from Franklin’s Williamson County and over 170,000 across the nation who joined the Union Army.

The soldier stands with one foot stepping on a decaying tree stump that signiﬁes the end of the “tree of sorrow,” which Black people were tied to for sale

or even hanged from as punishment, sculptor Joe Frank Howard said. A pair of broken shackles lie partly buried in dirt, signifying that the Black soldiers were “never to be chained again.” Howard, a Black artist with ﬁrsthand experience of Jim Crow racism, spoke recently about his vision for the statue. “These are people that were not classiﬁed as human beings. They were cattle or some type of work animals,” he said. “And for these men, to sometimes escape from plantations to be able to ﬁght this war so that their people can be free, that march for freedom was the ﬁrst march that led to Montgomery or any other type of march that has been for our freedom.”

“FIRST THING THEY SEE” City leaders at the ceremony vowed that the unveiling wasn’t the end to Fuller Story project, but a beginning as more stories are unearthed and shared. Alma McLemore, president of the African American Heritage Society of Williamson County, was one of those in attendance on Saturday. The Franklin native’s family has lived in the city for generations, and she has worked for years to preserve the stories of the city’s Black residents.

“We all know people who come through this community, the ﬁrst thing they see is the statue in the middle,” she said, referring to the monument erected in 1899 by the United Daughters of the Confederacy. The group sued the city in 2019, claiming it owned both the square and the monument, after plans were announced to install historical markers there explaining the experience of African Americans during the Civil War.

Rochelle Wright, a ﬁrst grade teacher and Franklin native who was also at the ceremony, said, “Something like this to happen gives hope to the future.”