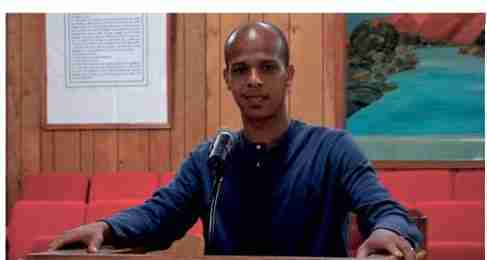 HOPKINSVILLE, Ky. (AP) – Looking back, the Rev. Cortez R. Miller imagined he would become a pastor at the age of 30, but last Sunday, the 30-year-old celebrated his fifth pastoral anniversary at Moore’s Baptist Church.

“It all happened so fast,” said the husband and father of three. “I guess it’s like when you don’t know the decision to make, God will make a decision for you.”

Miller was 25 years old when he was named pastor of the Cypress Street church. He had hit a crossroad in his career. At the time, he was active-duty military with eight years of service and two deployments to Iraq under his belt. His options were to re-enlist or get out and go into full-time ministry.

“I didn’t really know what to do,” he said when the church elders asked him to pastor. “And all of a sudden, while I’m still in the Army, I look up and I’m pastoring a church.”

Miller was voted in by the church board after the former pastor resigned.

Walking in, the young pastor knew the congregation itself was divided on if he was qualified to lead, but Miller said he just looked to God, like he’d done many times in the desert, and continued the mission.

“You don’t have to be qualified by man’s standards if you’ve already been qualified by God,” he said. “Opposition is a normal thing, so you don’t blame people for having an opinion.”

Growing up, Miller always knew he would go into ministry. He attended Cedar Grove Baptist Church as an adolescent under the leadership of the Rev.

George Esters, who baptized him, ironically, at Moore’s Baptist.

“(Cedar Grove) didn’t have a baptism pool at the time, so Rev. Esters actually baptized me here at Moore’s Baptist,” Miller said. “The very pool I baptize folks in is the one I got baptized in. Things really do come full circle.”

Miller started preaching when he was 17 and joined the military shortly after high school so he could see the world. He said it’s funny how no one questioned him about going into the Army, but a few people asked why he would leave the military to preach.

“I was preaching in the military, so yes, I left to keep preaching,” he said. “The same faith that we talk to people about, if we don’t operate in that same faith, then we’re just talking.”

Miller thanks his congregation for being faithful and patient with him as he develops in the role of pastor. He recognizes that many of them have lived way longer than he has and can offer perspective.

“In hindsight in pastoring, it’s one of those things where you have to draw closer to God,” he said. “You ultimately learn to listen to God in order to lead and to the people so you know what to talk to God about.”

“There are times you feel you’re moving in the right direction without getting the right results,” he said. “As a young pastor, I want things to happen right now, but I had an older pastor say to me, ‘Anything that grows too fast will die quickly.”’

His congregation is predominantly African-American and a mixture of ages, but he’d like to do more to bridge the gap between young and old.

“There’s always going to be a different generation to appeal to, but the message is still the same,” he said. “You’ve got to update the method but not the message.”