We are blessed by wrestling with God 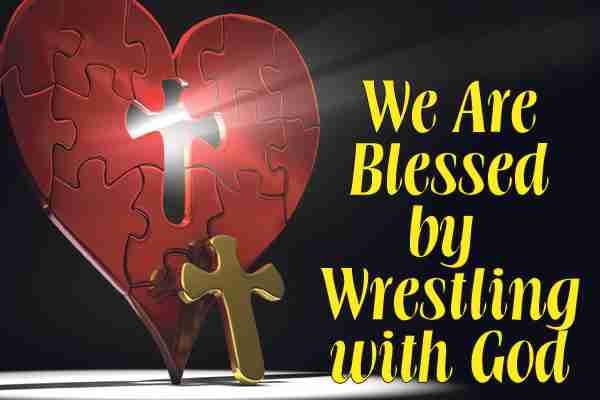 ‘Sometimes we fight against the very presence of God within us, a presence sent to teach us the power of God’s convictions already planted in us … God uses human angels to test our conviction, to strengthen us to achieve His goals and accept the opportunities He has planned for us according to His purpose for our lives.’

In our private moments, many of us instinctively wrestle with God and with man. Often we are at one stage or another; we are either wrestling now, just finished wrestling or about to start to wrestle with God.

Our souls get stirred in earnest prayer and that’s when we feel the struggle of the match and can often see God’s handiwork in the battle. Often God comes in the form of angels, who take hold of us physically and spiritually.

According to Genesis 32:22-33, it was early one morning when Jacob sent his family ahead of him over the river while he stayed back to perhaps pray for the courage to face his brother Esau.

Wrestling with this angel is strange. One would have expected on a mission of reconciliation like his that God would have comforted him; after all, he was destined to be the father of many nations.

Bishop T.D. Jakes, in his new book Instinct, shares a thought about such wrestling. Jakes points out we must follow both our instincts and our intellect. “Often our opportunities come clothed in obstacles that must first be overcome,” he writes. Learning to listen to our intellect and to follow our instincts is much like Jacob’s wrestling with God.

It was Jacob’s instincts the angel wrestled with, while, at the same time, the angel spoke to his intellect, asking, “What is your name? “Jacob,” he answered. “Your name will no longer be Jacob, but Israel because you have struggled with God and with humans and have overcome.’”

Jacob’s wrestling was both a physical and a spiritual match. On the spiritual level, it was a fight filled with vigorous acts of faith, fueled by his desire to reunite with Esau to set things right again.

On the physical level, the angel broke Jacob’s hip but the touch of Jacob’s hip by the angel both wounded and healed him. While Jacob may have won the wrestling match, his thigh was put out of joint. As a result, Jacob walked with a limp but now had a new name, Israel.

This wrestling match could have been discouraging to him and it could have shaken his faith and silenced his prayers but it didn’t do either of those things.

Why? Because, it was a fixed fight. God had it all under His control. The angel couldn’t win, because Jacob was predestined to prevail. Jacob’s wrestling match wasn’t won by his own strength, either, but, rather, by the strength of God within him.

Sometimes we fight against the very presence of God within us, a presence sent to teach us the power of God’s convictions already planted in us. In Jacob’s case, and in mine and in yours, God uses human angels to test our conviction, to strengthen us to achieve His goals and accept the opportunities He has planned for us according to His purpose for our lives.

Paul says in Romans 8:26, “In the same way the Spirit helps in our weakness, we do not know what we ought to pray for but the Spirit himself intercedes for us with groans that words cannot express.”

When you think about it, groans are the noisy sounds in fierce wrestling matches. Wrestlers grunt and groan, straining to win. We, too, groan in prayer, groaning so deep in our spirits that the sounds become too deep for mere words.

Wrestling with God, means while we may gain victory occasionally we leave the match broken. This is when we must remember Paul’s lesson to the Corinthians, “For it is when we are weak that we are made strong” (2 Corinthians 12:10).

When we become weak in ourselves, we become stronger in the Lord and this is when we are blessed by having wrestled with God.