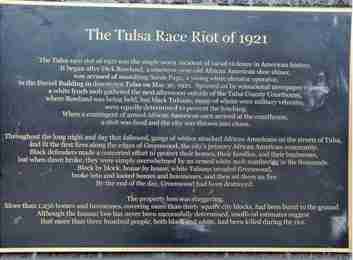 It was one of the most horrific acts of violence inflicted upon the black race. The riots and massacre in Tulsa, Oklahoma on June 1, 1921, forever changed a highly successful, upwardly mobile Negro community known as Black Wall Street. Some dubbed it a mini Beverly Hills while others called it “Little Africa.” But what is not questioned is how these residents all worked their way to prominence owning airplanes, medical schools, two movie theaters and hundreds of black businesses. Their accomplishments were astonishing considering it was the mere turn of the century – and conditions for blacks were hardly favorable.

But in a matter of 12 hours on a fateful summer day –the fruits of their labor were gone. Whites, said to be envious of Black Wall Street –burned it all to the ground, leaving the once thriving community in flames and smoldering. The pride of black communities nationwide was now left in the dust –literally. Thousands of homes and residents were massacred while many whites were said to look on as if they were watching a lynching. Some say the massacre was due to a rumor that a black teen raped a white woman. But others say it was pure jealousy, that no whites could understand how a black town could thrive as Greenwood did. But whatever the reason, the legacy these black families hoped to leave behind, was now in ruins. Was their success all for naught?

Their treasuries were gone. Also among the ruins was the black hospital, leaving no place for the injured to go.

Dr. Olivia J. Hooker, at age 95 and then again at age 100 told her story to several news outlets. Hooker survived the devastation of Black Wall Street. She was just six when the massacre occurred, and she hauntingly remembers it well. Later, she would go on to become the founder of the Tulsa Race Riot Commission in hopes of demanding reparations for survivors of the massacre. In 2003, she was among the survivors to file an unsuccessful lawsuit seeking reparations.

She gave her account in an interview with the Wall Street Journal at age 100. Today she is 101. “I remember that day because it was a bright, shining day and we were supposed to get our report cards at school that day. But of course we didn’t get to school that day and our school was bombed and it was just rubble, just rocks. There was no school left there,” she told the Wall Street Journal.

In a previous interview, Hooker refused to ac- knowledge the massacre as a riot. “I refuse to call it a riot because it was really whites decided to burn down the homes of 10,000 people. That was not a riot. It was planned desecration. We were just small children and my family had not told me about prejudice and hate and things like that.

I thought everything in the preamble to the Constitution referred to me. I didn’t find out until this terrible night,” said Hooker, who eventually garnered her Bachelor’s degree from Ohio State University, her Master’s from Columbia University and eventually her Ph.D. in 1961 from the University of Rochester. At 45, she also became the first black woman to join the Coast Guard and said she did so, so that other women could be able to join.

In 2015, the Dr. Olivia Hooker Dining Facility on the Staten Island coast guard facility was named in her honor. And on May 20, 2015, President Barack Obama recognized the Coast Guard service and legacy of Dr. Olivia Hooker while in attendance at the 134th Commencement of the United States Coast Guard Academy.

Now, at 101, Hooker has received numerous accolades, but never any reparations for the desecration of her home and family on Black Wall Street. No other survivor ever received reparations.

In 2001, the bipartisan Tulsa Race Riot Com- mission examined the historical record and recommended reparations for survivors of the riots and their descendants. The Oklahoma state legislature responded by establishing scholarships, a memorial and economic development for Greenwood but declined reparations payments. Two years later, a group of survivors filed a lawsuit, Alexander v. State of Oklahoma with the aid of Charles Ogletree and Johnnie Cochran, seeking relief in the form of education and healthcare for Greenwood residents. But the courts, rejected this lawsuit, citing the statute of limitations bars any relief.

Rep. John Conyers’ (D-Mich), bill, H.R. 98, would overturn the result in ‘Alexander v. State of Oklahoma,’ providing a remedy in court for anyone deprived of their rights on account of race in the riot or its aftermath. H.R. 98 was to be named the John Hope Franklin Tulsa-Greenwood Accountability Act, in honor of the esteemed historian who documented the Tulsa Race Riots. But the bill was referred to the House Judiciary Committee. With just one co-sponsor, Rep. Bobby Rush (D-Ill.), the bill died in committee without action. Conyers introduces a bill every year on the floor of the House to remove the statute of limitations in the Greenwood case to allow the survivors’ lawsuit to move forward. But that bill has never gained any traction and likely won’t in a divided Congress. The families of the survivors continue to wait and hope.

In 2013, the Tulsa Police Chief Chuck Jordan apologized for the actions of the Tulsa police force back in 1921. “As your chief, I can apologize for our police department. I am sorry and distressed that the Tulsa Police Department did not protect its citizens during those tragic days in 1921.”

But many blew off his apology, saying that real reparations come in dollars and cents and not words. So far, that hasn’t happened.

But many say the African Americans can do justice to its predecessors by keeping the legacy of Black Wall Street alive by constructing thriving black communities all over the United States.

Next week, in our third and final installment in our tribute to Black Wall Street, we’ll examine what South Florida has done to keep the legacy of Black Wall Street alive. Are there thriving black communities in Miami-Dade, Broward and Palm Beach Counties?

What efforts are underway to create Black Wall Street efforts in our South Florida area? There are measurable efforts taking place, but where do they stand? Are they experiencing success? Can they possibly measure up to the original Black Wall Street?