The big truth: The big problem is the big lie 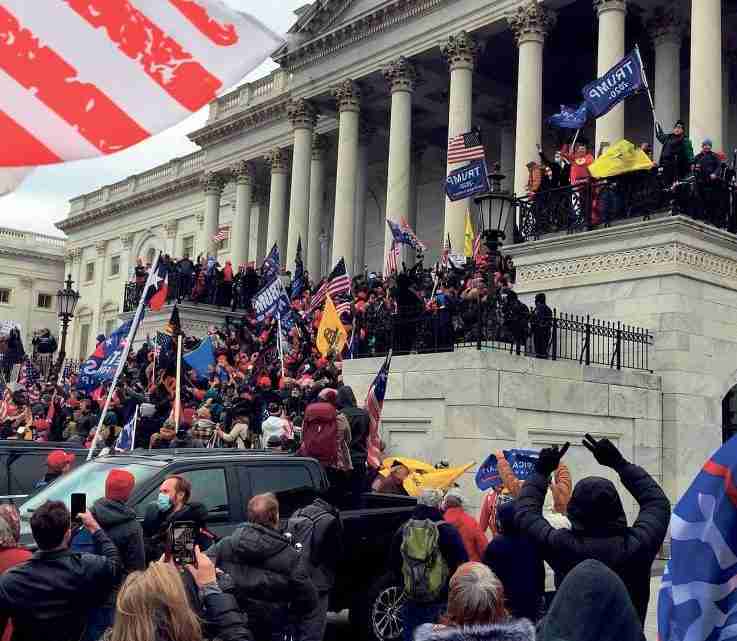 It’s been a year since a mob of Trumpists violently attacked the U.S. Capitol. They wanted to stop Congress from afﬁrming President Joe Biden’s victory. Some of them were out for blood. All of them were motivated by the former president’s Big Lie that he won the election but that his victory was stolen from him and his supporters.

That lie has been debunked by journalists and election ofﬁcials—both Republicans and Democrats. It has been rejected by courts. But it has never been abandoned by Trump or his right-wing allies. And so one year after it fueled an attack on Congress and the Constitution, the Big Lie is still a big threat to our democracy.

The Big Lie causes big harms in lots of ways by fueling anger and mistrust about our elections among Trump’s base.

Many if not most Republican ofﬁcials know that Trump’s Big Lie is not true. But they are cynical and corrupt enough to use it to justify new voter suppression laws and other schemes to overturn the will of the voters. Farright activists have harassed and threatened election ofﬁcials across the country. And they are trying to get elected to state and local positions that will give them the power to oversee future elections.

Donald Trump would love to go into the 2024 elections knowing that he has loyal Trumpists in place to reject or “ﬁnd” as many votes as he needs to declare victory. That’s why Trump has endorsed the effort by Rep. Jody Hice to  replace Georgia’s Republican secretary of state Brad Raffensperger. Raffensperger refused to embrace the Big Lie, stood up to Trump’s bullying, and respected the will of the voters. Hice has promoted the Big Lie. That’s the kind of guy Trump wants deciding which votes to count—and not count— in 2024.

Trump has endorsed other secretary of state candidates, and his political henchman Steve Bannon in encouraging Trumpists to try to replace election ofﬁcials at the local level.

Meanwhile, state legislators are making it easier for partisan Republicans in state legislatures to mess with vote counting by taking control from local ofﬁcials – and even to simply override the will of the voters.

That is why we urgently need new federal voting rights legislation—and why we need senators and President Biden to work together to overcome “states’ rights” Republicans and their use of ﬁlibuster rules to block the Freedom to Vote Act and John Lewis Voting Rights Advancement Act. Both pieces of legislation take on both voter suppression and election subversion. The John Lewis Act would make it illegal for a public ofﬁcial to “willfully fail or refuse to certify” an election victory by the candidate who gets the most votes. The Freedom to Vote Act only allows local election administrators to be removed by the state if they have a legitimate cause to do so.

As Sen. Raphael Warnock said on Jan. 4, “Our democracy is in peril and time is running out.”

“This is a moral moment,” Sen. Warnock said. Indeed it is.

There’s also another moral duty facing our elected leaders. And that’s ﬁnding out the truth about the Capitol insurrection and those who incited it, planned it, facilitated it, and have since tried to downplay or cover-up that assault on our democracy. Criminals need to be held accountable for their crimes—and not just those who smashed windows and attacked Capitol police.

Republicans love to talk tough about the rule of law, but now many of them are resisting the rule of law by trying to undermine and obstruct the House committee investigating the insurrection. And they’re trying to rewrite history, downplaying the violence and portraying its perpetrators as patriots.

The problem for them is that the violent reality of that day has been well documented. The same is true for other casualties of the Big Lie, including harassment and threats against election ofﬁcials.

The Big Lie and all those who have spread it have created a dangerous reality in which millions of Americans falsely believe that President Joe Biden’s election was illegitimate, and that Donald Trump should still be our president. And that makes them more willing to determine the outcome of elections through violence or the raw exercise of power.

In the year ahead, we need to defend democracy by answering the Big Lie with the truth, and by acting to defend our democracy at the ballot box.

Ben Jealous serves as president of People For the American Way and Professor of Practice in the Africana Studies Department at the University of Pennsylvania where he teaches leadership. Jealous has decades of experience as a leader, coalition builder, campaigner for social justice and seasoned nonproﬁt executive. In 2008, he was chosen as the youngest-ever president and CEO of the NAACP. He is a graduate of Columbia University and Oxford, where he was a Rhodes Scholar, and he has taught at Princeton and the University of Pennsylvania.

Next post It still matters: MLK’s vision of love as a moral imperative