The cycle of death, anarchy and mayhem will persist 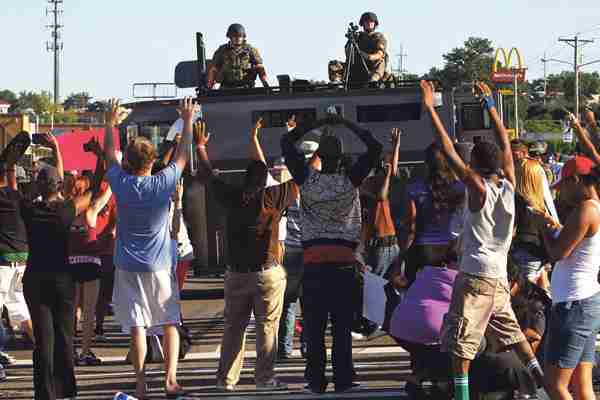 America ignores its history and is doomed to repeat it. Such is the case with Ferguson, Missouri, and the killing of Michael Brown by Officer Darren Wilson. This killing represents a continued American unwillingness to acknowledge our race problem – one in which black life is cheap.

Racial tension simmers in all our communities, regardless of size, because the color divide persists in our culture. Racism is like lava which bubbles beneath the surface until its pressure creates a fissure or the dome breaks into an eruption. Racism is equally hot and destructive. Until we accept that the work is not done, we will revisit this cycle of death, anarchy and mayhem.

Whether the racism is verbal, as from former Los Angeles Clippers owner Donald Sterling, or physical, as in the killing of Michel Brown in Ferguson, it threatens to consume us all. If there is a non-black person in America who believes he or she is exempt from the potential fury, I urge you to stop deluding yourself that this does not concern you. If there is a black or Hispanic person who believes we’ve matured past racial conflict, I offer you the same advice: Be honest with yourself. Your child’s life may depend on it.

Michelle Alexander’s seminal book The New Jim Crow continues to resonate because it deftly explains how we arrived at this point of local police forces resembling military tactical units. Police continue to argue that criminals are better armed, requiring that their own armaments be more extreme. However, the use of armored vehicles on average citizens is not justified or necessary since the average person hardly confronts officers in an armed capacity. These units have killed old women, invaded the wrong homes searching for criminals and terrified unsuspecting families. Should America’s streets resemble those of Afghanistan, Iraq and Palestine – really?

Policing is not war, not even under the most extreme circumstances. Couching street crime in the language of war creates a mentality in law enforcement officers that makes for abuses of power and a sense of impunity in dealing with average citizens. It also diminishes our soldiers’ sacrifice.

Was a highway patrol officer’s beating of a mentally ill woman on the side of the road war? Was a child walking in the street in Ferguson, Missouri, war? Do looters really rise to the level of war? Was it war in Miami Gardens, when police arrested a man more than 100 times – even when he was working and committing no crimes?

War has a language and an attitude that precipitates a loss of perspective on the value of human life. One need only refer to such abuses in actual wars.

America’s streets, particularly those where people of color live, reflect a racial disconnect between blacks and whites. Somehow, whites tend to believe we deserve less protection from the officers we pay, less consideration when the choice is between shooting and de-escalating a confrontation and less care in a traffic stop or in a stop and frisk. Blacks continue to be viewed as a criminal element, even when well-educated. Do you recall Dr. Henry Louis Gates Jr. being arrested for “breaking” into his own house?

Race is at the core of Ferguson, as much as it is in many police-civilian confrontations. Racists should not carry badges. In Fruitland, this year, two officers were found to be members of the KKK.

There is little hope that some white Americans will understand what the people of Ferguson are feeling and why they are trying to communicate their fear of being the next Michael Brown. It’s a black thing for real.

Dr. Jeffrey Dean Swain is director of the Centers for Academic Support Services at Florida Memorial University and teaches criminal, constitutional and public school law. He is also author of six books on race and culture, a minister and social commentator.