The politics of Colin Kaepernick: Why Miami should set a positive example to the world 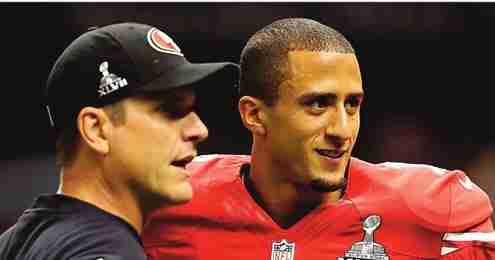 Colin Kaepernick has yet to be picked up by any NFL team and the Dolphins could still set a standard by doing so.

Recent decisions surrounding one of today’s most talented football players continues to leave most of the sport’s fans scratching their heads. Especially when considering that Colin Kaepernick is among the sport’s most elite-level players of today who could surely help to take most any struggling team’s offensive game to the next level.

Unfortunately, it’s a sad analogy when the majority of the fellow players and coaches (the people who are chiefly responsible for producing winning seasons for a franchise) within a sports organization are foaming at the mouth to get a player of this caliber signed to lead their team, yet the individuals responsible for funding each team’s endeavors are cutting off their nose to spite their face.

It’s also ironic how a sport that has an overwhelming number of players, coaches and other personnel who are of African American decent and who are the mules who keep the economic engine accelerating in each of the 32 U.S. cities of an

NFL team, yet not one of the non-African American owners has been willing to step out and sign this gifted young man due to philosophical differences.

Love him, like him, hate him or whether you have no opinion at all regarding him, Colin K. has proven to be a great quarterback in the NFL. His athletic abilities and take charge attitude have made this ‘Grid-iron General’ one of the hottest commodities among today’s quarterbacks. Unfortunately, what most team owners fail to realize is that they should not allow his personal beliefs to interfere with his (and their) potential success as a professional.

What harm does it really cause for the man to grow an Afro hairstyle the length of Cousin It or whether he refuses to stand in honor of the national anthem as long as he “performs” superbly in his job duties while on the field? After all, the last time I checked it was a team’s performance on the field that ultimately matters, thus translating into increased ticket sales, team apparel sales, licensing agreements and more. Besides, if America genuinely embraces “freedom of religion and so much more” as it claims to do then why is it not a problem when Jehovah’s Witness followers refuse to participate in any flag-related ceremonies or how select professional athletes have refused to attend awards’ ceremonies at the White House?

According to the U.S. Flag Code (http://www.ushistory.org/betsy/flagcode.htm), Kaepernick has not broken or committed any acts punishable by law.

In a city that leads the nation in terms of the diversity of its residents, a city that always claims to be about creating opportunity for anyone/everyone, it would do Miami good to sign such a player.

No, Colin K. is not Cuban, Haitian or Jamaican nor does he speak Spanish, French Creole or Patois. However, he CAN perform exceptionally well at his craft and that translates into a language everyone on Planet Earth can understand: green dollars.

Despite the recent agreement between the Miami Dolphins and Jay Cutler, the previously injured and semi-retired quarterback whose ability to have a productive season this year is questionable, the smart move would be for the Dolphins’ administration to secure Colin K. as an ideal security option. Besides, welcoming Mr. Kaepernick to the Miami Dolphins could possibly produce the same championship results which the Miami Heat franchise experienced a few years ago by signing LeBron James to join Dwyane Wade, Udonis Haslem and company. That is, providing they assemble a legitimate offensive line around him to protect him and create opportunities for their offensive strategy instead of a group of lackadaisical pillars as the Atlanta Falcons did when Michael Vick led their squad, but have changed since Matt Ryan has assumed their reins.

If the Miami Dolphins’ decision-makers and South Florida can manage to place politics aside and concentrate on the experience, qualifications and potential of Colin K. as a candidate, it could become one of the best hiring decisions this sports organization (or any other) could make in years. Otherwise, the Miami Dolphins can expect to be one more team who will likely regret not snatching this gunslinger when they had a chance. After all, why limit your own potential just because someone has different opinions than what you or someone else may think? Since the beginning of time society has had an ignorant way of thinking when it comes to disagreeing with outspoken figures who oppose what they’ve interpreted as mistreatment. In the 1950’s and 1960’s it was Paul Robeson, Jackie Robinson, Muhammad Ali, Bill Russell, Jim Brown and a few others. In the 1970’s, 80’s and 90’s it was Althea Gibson, Arthur Ashe, Kreem Abdul-Jabbar and Mahmoud Abdul-Rauf. In the last decade its been LeBron James, Colin Kaepernick and a few of music’s top personalities. The point is, it’s amazing how America can accept the beliefs-opinions (i.e. “lifestyle”) of gays and lesbians today whereas twenty-years ago it was totally frowned upon by everyone from the corporate world to churches. And, it’s amazing how U.S. citizens are comfortable with large numbers of our youth being shipped off to foreign soil to risk their lives fighting in win-less civil battles (and remember, civil wars last generations, they are not measured by four-year terms in office) which rightfully have nothing to do with us as U.S. citizens, then why hasn’t America embraced outspoken African American athletes who disagree over the way(s) in which their people are being used, abused and confused by law enforcement, judicial systems and practically every other sector of our society? That is, if America really is a sports-oriented society as it is believed to be.

* Santura Pegram is a freelance writer and the director of STS Logistics LLC – Seaport Transportation Services LLC in Ft. Lauderdale, Florida. A former protege-aide to the ‘Political Matriarch of the State of Florida’ – M. Athalie Range – Pegram often writes on topics ranging from socially relevant issues to international business and politics.