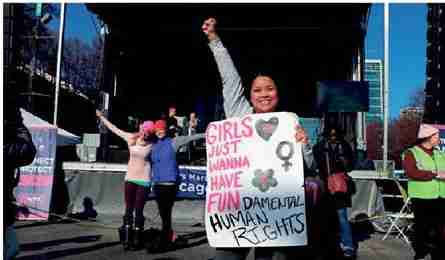 March is Women’s History Month and normally it is celebrated with wonderful activities around the country recognizing the brave women who have made memorable contributions to this great country of ours. But imagine my shock when I turn on the TV or go online and see the hordes of women marching in cities around the country donning pink “Pussyhats.” Yes, “Pussyhats”! It bothers me just writing the word and I refuse to say it out loud.

There used to be a time when certain words were off limits in polite society. But not now. This is a new generation pushed by progressives where nothing seems to be taboo.

Also it used to be that people marched for REAL women’s rights: like the right to vote or the right not to be treated as property or second-class citizens. But we have all the rights men have now.

We run the family. We run institutions. We run government agencies. We even run military units and have the right to be on the front lines and fight and die for our country.

So what are these women marching for? Just because they hate Donald Trump and the fact that he is POTUS instead of Hillary Clinton – the first woman to almost become POTUS.

So they have been marching since the day after Trump’s inauguration and apparently have no plans to cease and desist. But it is not just the violence that accompanies some of these protest marches that bothers me, but some of the signs are absolutely shocking. These are some of the same people who demanded that Republicans respect the office of the presidency when Barack Obama was POTUS, but they seem to totally ignore the office when it comes to Donald Trump.

The signs are downright demeaning and outright hateful and nasty. Dozens are just unbelievable, like:

• DON’T TREAD ON MY PUSSY

There were dozens more but my two favorites were the ones held by two old ladies my age or older:

• NOW YOU’VE PISSED OFF GRANNY, and

Yeah, this is out in the open where children can see them. And if I were still a Roman Catholic, I would have to go to confession for just repeating them in my head.

And the sad thing is that the organizers and participants are being supported by such organizations as the ACLU, who is actually holding seminars to show liberals and anarchists how to protest against President Trump.

Well-known liberal globalist billionaire George Soros has invested more than $90 million in the 402 “partner” groups for the women’s march in D.C. the day after inauguration. These groups included Planned Parenthood, the Natural Resources Defense

Council, AFL-CIO, MoveOn.org, and ACLU, according to an article in Value Walk. An interesting read: www.valuewalk.com/2017/01-georgsoros-funds- riots.

Soros, known for funding all these activities tied to the Democratic Party, also is reported to have given $246 million through his Open Society Foundation to 100 of the 544 groups participating in the women’s march in D.C. on “A Day without a Woman.”

The Washington Times writes about “The man behind the women: George Soros gave $246 million to partners of Women’s March,” held on International Women’s Day.

All this money and what are they marching for that we don’t already have? Nothing! Again, it’s all because they wanted Hillary to win.

Oh yes, and they really hate Donald Trump. Trust me, they won’t be satisfied until they can say, “You’re fired!”

Next post Is President Obama’s legacy the real problem with Obamacare?