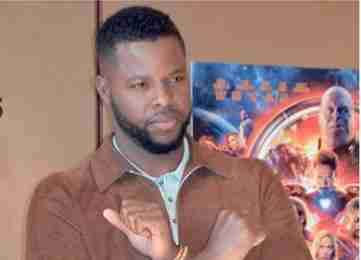 SUPERHERO: Actor Winston Duke was recently in town to promote the upcoming Marvel’s “Avengers: Infinity War,” in which his and other “Black Panther” characters appear.

MIAMI – Marvel’s “Avengers: Infinity War,” is undoubtedly one of the most anticipated movie releases of the year. With the record breaking success of Marvel’s “Black Panther,” the rush to the big screen on Friday, April 27th is inevitable. The anxiety is real! The captivating thought of experiencing super heroes like Thor, Captain America, Iron Man, Black Widow, Gamora, Falcon, Black Panther with M’Baku fighting together as they take on Thanos in Wakanda is breathtaking.

At a sit down with Winston Duke who plays M’Baku, the young Tobagonian actor gave us the first-hand scoop on his role in the movie and more!

“The glory of Miami! Miami is wonderful, it’s beautiful. We just came from Florida Memorial University. [I] got a lot of love from those students over there and a couple organizations connected with the school. It’s a good day. Young, hopeful students. And now they saved the best for last,” said Duke.

Q: Will there be a treasure hunt of sorts in Wakanda of trying to find the stone? Is there anything you can give up?

A: I can’t give anything up I’m not even really hiding anything, I haven’t seen the movie. I have no idea, you know? I just know what I worked on and it was good. But I can tell you all of it is going to be weaved into this really beautiful tapestry storytelling like you’ve never seen before. Ten years for you to be invested in Thor and Loki and you know, we just came out of Wakanda being introduced to Shuri and Okoye.

Q: How did it feel to join the Avengers team.

Q: Was there an overlap when you were shooting?

A: No. Not for me. What’s really beautiful is that Marvel is always going back…to revisiting the source material of the comic books and always wondering… How can we interweave this or that? So, I got called on a Tuesday and they said, “Can you be in here on Thursday?” And I answered the call.

Q: So did you do any different kind of prepping to bring M’Baku back?

A: What was really good is I was already invested in M’Baku. I knew his attachments, so I didn’t have to go back and do that work. So now it was this dude that I made three-dimensional, putting him in a new circumstance and that was easier to do.

Q: Was it a 4th quarter change to add M’Baku?

A: I can’t tell you, I have no idea. That is above my pay grade. I don’t know how it works. I just know I showed up. I answered the call.

Q: Have you gotten to see the responses of your folks from the Caribbean and how does it make you feel?

A: I just caught up with my aunts and uncles and cousins in Tobago and my uncle and his wife…they’re in their early 60’s and they haven’t been to that movie theater, ever. I’m from what’s called a village. It’s called Argyle Village and like, the whole village went. They came out and he was like “we watched” and he, my uncle, jumps up and goes, “that’s my nephew!” And the rest of the family was like (covers face).

Q: Can you capture the hashtag #Mbakuchallenge?

A: (laughs) ah, that hashtag #Mbakuchallenge I just wanted people to like the character and it’s just taken off like wildfire and all the other things that ensued around M’Baku..
Nicole Campbell contributed to this story.