A conversation with Robert Battle 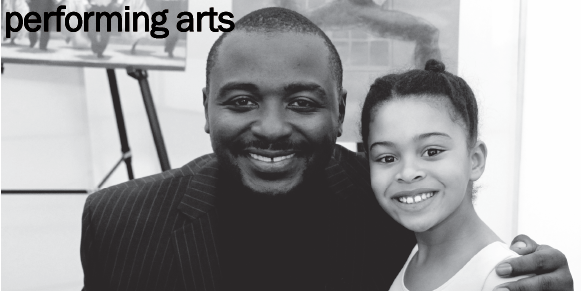 Robert Battle’s journey to become the artistic director of the prestigious, internationally renowned Alvin Ailey American Dance Theater is full of wisdom often found on the pages of popular, bestselling inspirational books. As a young boy growing up in Miami, he was visualizing his future without knowing the phrase to describe it; unwittingly activating the law of attraction and using his imagination to step beyond fear instead of falling prey to the chatter around him.

Battle and the Alvin Ailey dancers are helping the Adrienne Arsht Center for the Performing Arts celebrate its 10th anniversary with a commissioned performance, workshops and the usual inspiration that the beloved company exudes on stage and off with appearances from Feb. 18 through Feb. 21.

The South Florida Times chatted with Battle by telephone recently about how he discovered his passion, the power of his imagination and how a pastor’s sermon “awakened” him.

How did you first discover your passion?

I was raised by my great aunt and uncle. Because of that, I knew that people took me in and cared about me when they didn’t have to. It made me a very vigilant person, always wanted to pay that back by doing the best that I could. My aunt, Destiny Williams, was a school teacher and she was also was into theater. She had a group called the Afro Americans that did poetry and song, different kinds of acts about the black experience. They made me start to learn something about history but through the performing arts. I paid attention to my teachers, my mother’s group. I wanted to know, what was that Langston Hughes poem about a dream deferred? What is poetry?

Battle said church experiences that included reciting poetry and performing for Easter helped him to realize that he was “passionate about the performing arts.”

It sounds like your life gave you clues that you paid attention to. How important is it to pay attention in life?

One of the things that I usually say to students is pay attention. It’s a life message. Those doors open, sometimes they only crack open. If you’re not paying attention, you might think that that door is closed. You push on it, and it could lead to your best life.

Once someone discovers their passion, they may not pursue it because of fear. How did fear show up in your life?

I was very shy. I didn’t really like school because I was picked on. I didn’t like to talk a lot because I had a very high pitched voice for a boy. The other kids would say ‘he talks like a girl.’ I had this big head shaped like a perfect circle, so people used to call me moon head, onion head, and that produced certain amount of fear of interacting. I was, picked on because I was interested in the performing arts by being called a sissy, being threatened.

How did you deal with the fear?

My imagination. I used to sit in the back yard in the mango tree and I would picture myself performing for thousands of people. And I didn’t just picture the performance, I pictured people leaving their houses and coming to the performance. I pictured what car they were driving, what they were wearing sitting in the audience. I could see my mom sitting in the front row. I could see this teacher of mine sitting over there. And then I could see myself performing and them enjoying it. I did that so much as a practice because it was pleasurable to me. Because within imagining and picturing those things, I would be totally fearless in that moment.

What role did your imagination play in you becoming who you are today?

Doing that over and over and finding that quiet space through visualizing, it helped me start to walk into the picture that I was creating for myself. As I pictured it, slowly but surely, it attracted me to it. At some point all I had to do – I already created the environment – now all I had to do was show up. And look at where I am now, where I’m speaking to thousands of people, where doing a lot of the things that you would think I wouldn’t because of my fears.

How did you move from imagination to manifestation?

I heard Maya Angelou say this when I was little. Courage is one of the most important virtues, not the absence of fear. It’s the presence of fear but doing it anyway. Without courage you can’t practice any other virtue.

What role does spirituality play in your life and your ability to accomplish your dreams?

A huge part. As a kid, I was a typical kid, we went to church. I didn’t always pay attention. I would crawl under the pews and tried to go drink the grape juice for the communion out of the refrigerator. Until one day, one of our presiding elders…did this sermon. Usually, I didn’t pay much attention to the sermon, but he awoken something in me, so much so, that I found myself in tears, I can’t remember what he said, I remember how it made me feel. I felt like all of a sudden I understood the power of spirit. I got chills. There is a plan for me. It was no accident that my great aunt and uncle took me in. My birth mother was in a place where she needed help. There was a divine plan there.

How does spirituality inform how you deal with disappointments?

When things don’t go my way, when I really believe that I really want something, and it doesn’t happen, there is a part of me that knows that it’s not supposed to happen right now. I’m always being informed by spirituality. There were a lot of times when I would not get what I wanted artistically or not be accepted in a program and feel like the door was closed in my face. Getting a bad review, when you have a higher sense of calling you know that …you’re supposed to learn something and keep moving forward, putting one foot in front of the other. That is my compass. It keeps me from being consumed with fear and disappointment.

What role do your thoughts play in your success?

What you think, you become. What are the thoughts that encompass your (mind) daily? Worries or fears or dreams, those thoughts become your output. It’s the law of attraction. You attract those things to you by focusing on them. What you think about is what you’re focusing on. You have to pay attention to it.

What if a person’s thoughts are negative?

It’s very important that if you’re sending a negative signal to yourself, you have to first of all acknowledge it. Often times we think to change something is like changing a channel on a television station. We don’t work that way. There’s a reason that you’re thinking about said thing. Acknowledge it before you change it. Now that you’ve acknowledged it, what’s the worst thing that could happen if I try to do something better? And then you can start to chip away at it. Thoughts matter.

You choreographed Awakenings for the Arsht’s 10th anniversary. Tell me about Awakenings.

It captures…that moment that I had seeing that preacher when something was awakened within me. Taking the helm of the company. It’s about a calling. A lot of things in my own life, also thinking about Alvin Ailey…and the reason this company is so important to the world. It celebrates that truth in special and wonderful way.

For more information and to purchase tickets, visit arshtcenter.org.