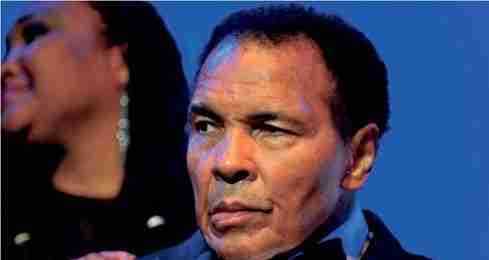 NEW YORK – Before he was even heavyweight champion or had changed his name from Cassius Clay, Muhammad Ali was a force in the music world. He had befriended Sam Cooke and released an album featuring his comic poetry and a cover of the hit Stand By Me. But starting in the mid-1960s, Ali himself would inspire songs of all kinds, from all over the world. Here are some notable releases about Ali:

Cassius Love’ vs. `Sonny’ Wilson
A 1964 comedy track by the Beach Boys that spoofed the Ali-Sonny Liston rivalry. Snippets of the band’s hit songs were interspersed with insults exchanged between lead singers Mike Love and Brian Wilson, cousins who would feud for real in subsequent years. “Listen Mike, with a voice like yours, when you open your mouth it’s a big put down,” Wilson cracks. Answers Love: “At least when I’m singing, it doesn’t sound like Mickey Mouse with a sore throat.”

The Louisville Lip (He’s the Greatest)
Memphis singer-songwriter Eddie Curtis used a funky blues track to tell Ali’s story, with digs at Floyd Patterson, Liston and other Ali foes. The song came out in 1971, soon before Ali lost to Joe Frazier in 15 rounds at Madison Square Garden, quickly dating some of the lyrics: “He’s the greatest, he’s the greatest,” Curtis chants, “don’t you know it, Joe Frazier.”

The Greatest Love of All
Written by Michael Masser and Linda Creed for a movie few remember, the 1977 Ali biopic The Greatest, this soaring, self-affirming ballad would conquer the world, first as a hit for George Benson, then as a standard performed by Whitney Houston.

Black Superman (Muhammad Ali)
A mid-tempo reggae ballad by British artist Johnny Wakelin, released in early 1975 as a tribute to Ali’s recent victory over George Foreman in the “Rumble in the Jungle” in Zaire. Wakelin sings some of Ali’s own rhymes and adds original lines such as “He moves like the black superman/and calls to the other guy/I’m Ali/catch me if you can.”

8ieme Round
Another homage to Ali’s knockout of Foreman, a catchy work of African pop music by Zaire’s Trio Madjesi and Orchestre Sosoliso.