In Buffalo, chicken wings are king 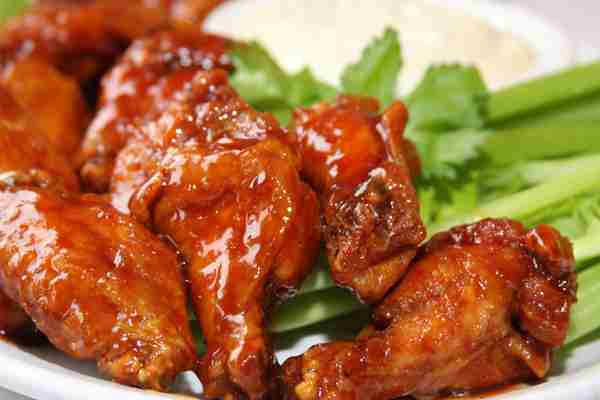 BUFFALO, N.Y. — Credit for the classic Buffalo wing goes to Teressa Bellissimo, who developed the dish in the kitchen of the Anchor Bar in 1964. Fifty years later, the Main Street eatery remains a must-see for countless culinary visitors.

But there’s no need to confine yourself to one place if you’re winging your way to New York’s second-largest city; the fiery finger food is a staple at virtually every pizza joint and pub you’ll visit.

The fun is that no two wings are quite the same.

Anchor Bar wings sizzle in the deep fryer until crispy. Then they’re tossed in a bowl with a mixture of butter and cayenne pepper sauce — Frank’s RedHot is the preferred brand — just before they are served alongside celery sticks and blue cheese dressing for dipping.

“They’re the original, that’s the bottom line,” said Drew Cerza, who was proclaimed Buffalo’s “wing king” after starting the wing festival in 2002.

A trip to Duff’s Famous Wings in suburban Amherst offers a different twist on the classic.

While the Anchor Bar serves up a crispy wing, Duff’s offers a softer, saucier version.

“They cover the wings after they sauce them and it really allows the sauce to penetrate the skin of the wing,” Cerza said.

Watch out for the heat here: “The mild is medium, medium’s hot, hot’s extra hot and extra hot,” said Cerza, “will kill you.”

Another option, where attention to detail is the theme, comes from the Bar Bill Tavern, just south of Buffalo in East Aurora.

The secret here — the sauce is applied to every deep-fried wing individually with a paint brush just before serving.

“They never go in a bucket,” explained bar manager Joe Morcelle. “When you start shaking wings, it starts breaking up the crispiness.”

The individual treatment also ensures the sauce gets into every nook and cranny, Morcelle said. And while most places pile the wings on a plate, the Bar Bill arranges them precisely this way: the five drums on the left, five flats on the right, fanned out to form a circle with the celery and blue cheese in the middle.

“You eat with your eyes,” Morcelle said (though you’ll still need plenty of napkins for your fingers).

Circling back to the city, another of the “wing king’s” favorites is found at La Nova Pizzeria, which has perfected a barbecue wing cooked over charcoal, complete with grill marks.

The festival doesn’t confine its offerings to the usual. Along with the traditional hot, medium and mild varieties, past offerings have included lime cilantro and chipotle garlic wings, and even a meatless alternative featuring hummus dip and breaded green beans.

A couple of rules if it’s a true “Buffalo wing” (and not simply chicken wings) you want: They must be deep-fried, not baked or grilled, have at least a few shakes of hot sauce — and for goodness sake, no breading.

Warns Cerza: “In Buffalo, if you get caught breading a chicken wing it’s a misdemeanor.”

Next post White supremacy is the ultimate enemy within