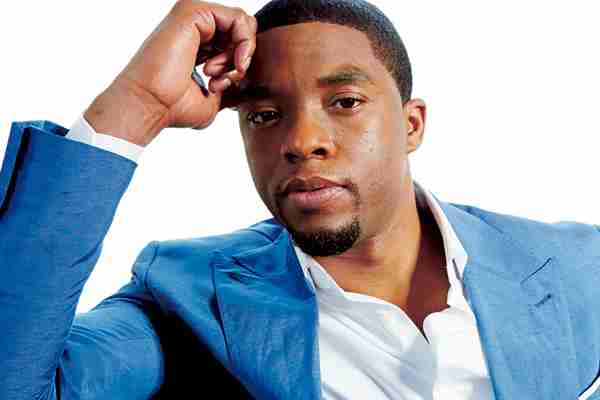 NEW YORK — A year after playing Jackie Robinson in 42, Chadwick Boseman was back in biopic spring training.

To become James Brown for the film Get on Up, Boseman needed to rely on an entirely different skill set. But the preparation necessary to transform into a tireless performer like Brown – “the hardest working man in show business,” after all – was oddly reminiscent of working out on the baseball diamond.

“I was like, ‘This is deja vu,’” says Boseman. “I’m waking up in the morning and lacing them up. Doesn’t matter whether it’s cleats or if it’s leather shoes.”

For the second time, Boseman has stepped into some very big ones. A largely unknown actor previously, the 32-year-old Boseman has emerged with back-to-back biopics of 20th century titans: one the revolutionary breaker of baseball’s color line, the other the Godfather of Soul. Both were unstoppable forces that blazed across civil rights-era America. One could steal home; the other could do the Mashed Potato.

Tackling one such historical figure is daring; two is audacious. It wasn’t Boseman’s idea.

“There’s no way in the world,” Boseman says was his initial reaction to playing Brown, still sounding genuinely resistant to the idea. Not only was playing such a complicated, iconic personality like Brown a fearsome challenge, it also could potentially typecast Boseman in a biopic bubble.

“I felt like if I keep doing this biopic thing, then all I’m going to get is biopics,” says Boseman. “I was already getting all biopic scripts.”

But director Tate Taylor (The Help) pressed. He brought Boseman in to read a scene in the movie of Brown at 63 and was immediately won over by the fresh-faced Boseman’s ability to transform into the legend late in life.

“I thought: This is the guy. Please let him be able to learn how to dance,” said Taylor. But it took weeks of coaxing: “Chad’s point of view was, ‘Nobody should do this. It’s just not even possible.’”

Get on Up, produced by Brian Grazer, had gone through other iterations. At one time, Spike Lee was to direct. Later, Mick Jagger, who frequently crossed paths with Brown and took much inspiration from him, came aboard as a producer. (Jagger is also producing an upcoming documentary about Brown, directed by Alex Gibney.)

The film skips across Brown’s expansive life, from the Georgia poverty of his hard upbringing to his more cartoonish and violent later years. (James died in 2006.) Get on Up, written by the brothers Jez and John-Henry Butterworth, attempts to synthesize all of James’ many dimensions: tyrannical bandleader, musical visionary, funk preacher, domestic abuser.

Brown’s vocals are used during performances in the movie, but the part required Boseman to play Brown across time and pompadours. He had to find the voice, the moves, the posture and the persona, and hope somewhere in there was the man, too.

“It was all daunting, to be honest with you,” sighs Boseman.

With so much research and dance training to fit into two months before shooting began, Boseman had to make a quick study. “They gave me the whole catalog of music and I just sat and listened to every song,” he says. “I started with the music because it was so visceral.”

Whereas most biopics travel a familiar path, Brown’s life resists a typical arc. One memorable early scene shows James, at his label’s request, accepting top billing over his early band, the Flames.

“There is a certain amount of cutthroat-ness to him,” says Boseman. “But it’s like what Little Richard says in the movie: When you see the moment, you have to seize it.”

It took some time for Boseman’s moment to come. He first got into theater, acting and writing plays, as an undergrad at Howard University. Boseman had roles on little-seen TV shows like ABC Family’s Lincoln Heights and NBC’s Persons Unknown, but before 42 he had only acted in one film (2008’s football drama The Express). Boseman still attracted notice in Hollywood, often just missing out on big parts.

“2011 was a rough year,” he says. “I was up for everything that was happening that year, really good roles. None of them came through for me. I would get down to the end and then it would go to someone else.”

Now Boseman is seen as a rising star. “The cream eventually rises to the top,” says Taylor. The actor recently shot a supporting role in the big-budget fantasy adventure Gods of Egypt and has been rumored as a possibility to play Marvel’s Black Panther. One thing he says he won’t be doing anytime soon again: a biopic.

Next post ‘Get On Up’ tells James Brown’s story