Cube and Hart strike gold with Ride Along sequel 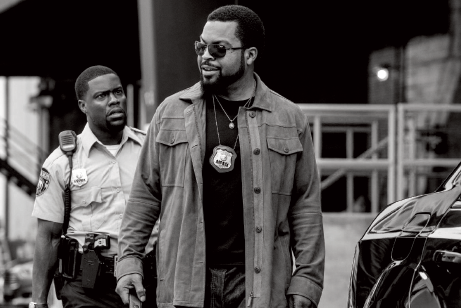 Ice Cube and Kevin Hart team up again to play Atlanta Police Department Detective James Payton and Police Officer Ben Barber, respectively. In Ride Along 2, our heroes take a trip to sunny Miami, Florida, following clues from a known Atlanta criminal named Troy (Glen Powell). What they end up exposing is an even bigger criminal with his thumb on quite a few people in quite a few high places; giving Ben one last chance to prove that he’s worthy enough to marry James’s sister, Angela (Tika Sumpter).

Reprising their roles as screenwriters for Ride Along 2, Phil Hay and Matt Manfredi (based on the characters created by Greg Coolidge) attempt to re-create the hilarious enchantment of the previous film. Thankfully, they were successful.

Our heroes once again have to rely on each other (good and bad habits included) to solve a make-or-break case. However, this time, Hay and Manfredi paid homage to the Beverly Hills Cop films by having the characters travel to a paradise locale to solve a seedy crime, learn the lay of a foreign territory and make friends in this new foreign territory. They even had one of our heroes hanging from a door during a car chase in the beginning; classic Beverly Hills Cop tropes.

Director extraordinaire, Tim Story, brings back the magic for a second time; making the sequel just as good as the first. The movie’s location served him well because filming in Miami gave Story a vibrant canvas on which to play. As a native Miamian, it was a delight to see that most of the film is set and filmed here; I do, however, have a bone to pick with the filmmakers. They only filmed in South Beach and Little Havana when those of us who call this tropical paradise home know that there is so much more to Miami.

Wherever the location, Cube and Hart still have great chemistry and comedic timing. I can’t say the same about Cube’s chemistry with Olivia Munn, who plays Miami Metro Police Department Detective Maya Cruz. Munn, who isn’t Hispanic, but Chinese-American, plays the female equivalent of James. She’s always scowling, knows how to put down a criminal with minimal effort, and drives a muscle car. Unfortunately for the film, though, she has better chemistry with Benjamin Bratt’s character, Antonio Pope. Bratt’s Cuban accent is super cheesy, probably because the actor is Peruvian-American.

But, I digress. If Ice Cube (wearing his producer hat) and super producer Will Packer are trying to do for Ride Along what Vin Diesel did for the Fast and the Furious franchise, they’re on the right track. Confirmation that this is the direction Cube and Packer are headed is evidenced in the opening scenes of RA2 with Fast and Furious alum Tyrese Gibson as Detective Mayfield and macho neon cars replete with a chase that goes fatally wrong. James and Ben team up with a criminal named A.J. (the hilarious, yet racist Ken Jeong) to solve the case. I see multiples sequels in Ride Along’s future.

There are also a few awesome cameos, with Sherri Shepherd as the overbearing wedding planner Cori, Nadine Velasquez plays one of A.J.’s hot girlfriends Tasha, Yolanda Adams appears as the preacher officiating Ben and Angela’s wedding, Rick Ross shows up as Lemon Pepper and Dwyane Wade plays himself.

There is something to be said about looking to the past, embracing what works and using it to your advantage. You don’t have to reinvent the wheel; just give it a nice Beverly Hills facelift. With Ride Along 2 being just as good – if not better – as the original film, it looks like Cube and Packer have another great franchise on their hands.

Next post Woman rebounds from setback to launch sweet business