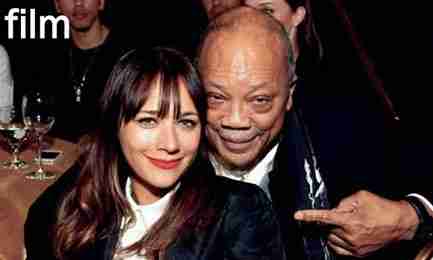 Like Jones, an easy raconteur, they tell stories. There’s a small scar from when he, as a youngster in 1930s Chicago, accidently wandered into a gang’s territory. “They nailed my hand to a fence with a switchblade, man,” he says. Jones points to a ring on his right pinkie left to him by Frank Sinatra, bearing the singer’s family crest. It has stayed lodged on his finger for years just at it did on Sinatra’s.

“The friendship was so strong. You can’t describe it. We loved to party together, make music together,” says Jones, smiling. “I’d tell (drummer) Sonny Payne: ‘Let’s get the back beat a little stronger,’ because Frank was only lifting his feet about a foot,” says Jones, stomping his foot to a beat. “Let’s get a foot and a half.” For six decades Jones has been the foot-stomping back beat to a staggering breadth of American music. His hands have been over everything. From Ella Fitzgerald to Frank Sinatra, Ray Charles to Michael Jackson, “Roots” to “In the Heat of the Night,” Jones – a trumpeter, pianist, composer, arranger, producer – is the great chameleon of 20th century music. He has recorded 2,900 songs, 300 albums and 51 film and TV scores. He has been 79 times nominated for a Grammy, winning 27. And he has produced seven kids, one of whom – Rashida Jones – has chronicled him in the new documentary, “Quincy.”

“When I look at it now, I’m overwhelmed,” Jones said in an interview shortly before “Quincy” premiered at the Toronto International Film Festival.

“To have your life jump back at you on the screen – wooo!”

“Quincy,” which will debut on Netflix and in select theaters, is an intimate portrait of a hard-to-summarize legend. He’s now 85 and has been through a few health scares. But after giving up drinking two and a half years ago, he says, “I feel like I’m 19.”

Jones, who in 2017 won a suit against the Jackson estate over unpaid royalties, also continued his critique of the pop star’s penchant for lifting songs or not accurately crediting collaborators. “It’s in the music. ‘Smooth Criminal,’ that says it,” says Jones.

“Michael was one patient and humble human being when it came to learning,” he adds. “His idols were James Brown, Sammy Davis, Fred Astaire, Gene Kelly. I saw him copying their things.” And while he applauds contemporary acts like Chance the Rapper and Kendrick Lamar, he believes there are fewer great songs today. A master of songcraft, Jones sees the art form diminishing. “What I’m missing the most is the songs,” says Jones. “There are beats and rhymes and hooks but that’s not a song, I’m sorry.”

But to give the impression that Jones has grown quarrelsome in his old age would do a great injustice to his playful inquisitiveness or his undiminished work ethic. “Quincy,” which spans Jones’ mammoth life, captures the still-very-active Jones producing a Kennedy Center show for the Smithsonian’s National Museum of African American History.

“He is like a giant beating heart. That’s what makes him a great dad and that’s what makes him a great musician,” says Rashida, the actress-filmmaker who co-directed “Quincy” with Alan Hicks. “He’s got pain like all of us. His stuff with his mom is really deep. It’s still fresh and it still hurts him. But he made a decision. He wakes up every day and he has mantras that he says to stay positive.”

“I’ve always done that. I guess that’s in place of a mother. I lost my mother when I was seven. They took her away in a straitjacket. That did not make our lives very nice,” he says. “My brother could not deal with it. He died in 1998, my younger brother. It was serious, man.”

Jones’ mother’s breakdown (she was nstitutionalized for schizophrenia) remains perhaps the most pivotal moment in his life. It’s impossible not to return to that incident and his hardscrabble childhood in Chicago when trying to answer where all the music came from in Jones.
Such beginnings would have made others more cynical.

“You can’t afford to get angry, man,” says Jones. “Remember Mark Twain’s words: Anger is an acid which does more harm to the vessel in which it’s stored than anything on which it’s poured. I said that to myself when Donald Trump won. Are you happy with our president? We’ll live through it. We’ll learn.”