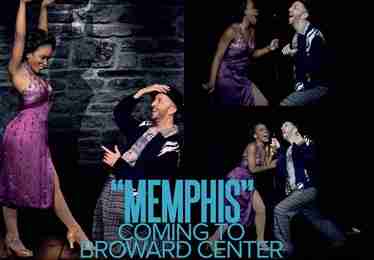 BROADWAY IN BROWARD: Khadijah Rolle and Brian Golub star in “Memphis,” coming to the Broward Center for the Performing Arts March 22 through April 8.

The Tony Award winning musical, “Memphis,” is on its way to the Broward Center for the Performing Arts stage. Slow Burn Theatre Company and the Broward Center present the award-winning Broadway musical that bursts off the stage with explosive dancing, irresistible songs and a thrilling tale of fame and forbidden love.

Performances in the Amaturo Theater will be held Thursday, March 22–Sunday, April 8. This winner of four Tony Awards, including Best Musical, is inspired by real events and the underground dance clubs of 1950s Memphis, Tenn. It tells the story of a radio DJ who wants to change the world and a club singer who is ready for her big break.

The creative team of Joe DiPietro “(I Love You, You’re Perfect, Now Change”) and Bon Jovi’s founding member David Bryan also took home Tony Awards for what the Associated Press labeled “the very essence of what a Broadway musical should be.”

Slow Burn Theatre Artistic Director Patrick Fitzwater is directing and choreographing the show, with performances Thursday–Saturday, March 22 through April 8 at 7:30 p.m. and Sunday at 2 p.m. with a matinee on Wednesday, March 28 at 1 p.m.

Tickets are $47–$60 and can be purchased via Ticketmaster, Parker Playhouse and affiliated venues. Buy tickets online at BrowardCenter.org or Ticketmaster.com; by phone at 954.462.0222 or the Broward Center’s AutoNation Box Office.

Next post 2018 Jazz in the Gardens a "grown folks" party