Miss Robbie to headline the Taste of Liberty City 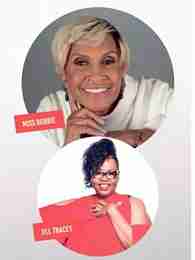 MIAMI – The nation’s foodie obsession is showing no signs of letting up. From well-attended food festivals to high rated cooking shows on television, folk are interested in eating and learning about food in all its delicious variations. And when music is included, the foodie enjoyment factor goes to another level.

Miss Robbie, owner of the legendary Sweetie Pie’s soul food empire that is featured on the Oprah Winfrey Network, knows a thing or two about food and music. The former background singer for Ike and Tina Turner has returned to her “first love,” and will headline the Magic City Wine and Food Festival – The Taste of Liberty City on March 31 at 7 p.m.

When an illness forced her to discontinue her singing career many years ago, she turned her focus to cooking, launching Sweetie Pie’s restaurant with her son, Tim. “Singing is my first love and chicken is my second,” Miss Robbie said in a telephone interview.

Her appearance at the event that Freez Frame Marketing and Media and Dine Black Miami created in partnership with Josh Jones Law, is a part of her reconnection to her musical roots. The 77-year old said she doesn’t feel her age and “I’m just living life and enjoying it.”

Of her upcoming show, she said, “I’m really hoping to reach out to everybody, the old and the young. I’m really trying to come in the middle and reach the multitudes.”

She wants her fans to know, “I appreciate all the support I’ve gotten through the years. The people who travel for miles and miles to see me. When they come to see me that’s inspiring to me.”

Ticket prices are $55 general admission and $75 VIP; which includes an additional buffet and open bar.