Stage play goes from the slave house to the White House 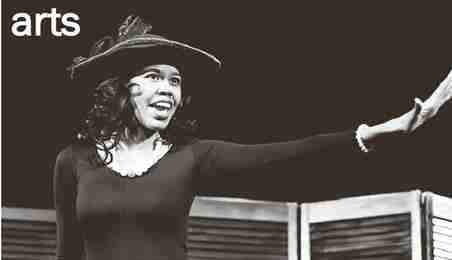 From the fire in their eyes and the flash of their teeth, twelve phenomenal black women make-up Morgan McCoy’s one-woman stage performance Evolution of a Black Girl: From the Slave House to the White House.

McCoy, a self-described storyteller whose niche for the art form was “cultivated” over time stitches a narrative quilt of the black woman and her suffrage’s as far back as the slave trade in pre-colonial Africa. The journey evolves to Michelle Obama’s exuberance as the first African American woman to serve as the White House matriarch.

On March 21, in recognition of Women’s History Month, McCoy presented her nationally acclaimed work at the Broward College North Campus in Fort Lauderdale before an audience of students, campus staff and community leaders.

The progression of her performances—from past to present—is intentional. “I wanted to strategically describe both past and current epidemics that challenge society in hopes that the voices of the past can offer solutions to save the future,” she said. From behind three black bi-fold partitions emerges a cast of characters who, according to McCoy, were created by happenstance, inspiration or divine dictation. She said her characters are women who speak from souls beaten and berated; miserable and merciful; despondent and resilient.

She remembers when Neba, an African woman spoke through her creative subconscious. “Out of nowhere I began to speak in an African dialect and she began to tell her story,” adding, “It was Neba who said, ‘I never felt like a slave because you have to be alive to be a slave …I died that day.”

Her monologue also offers a black woman’s perspective on the initial breakdown of the black family dynamic during the post-reconstruction era. “Black men so used to bein’ sold from they families they ain’t know how to stay home.”

As a student of history, McCoy tells the stories of Madame C.J. Walker, Maggie Walker, Rosa Parks, Billie Holiday, Pearl Bailey, Josephine Baker and Coretta Scott King with a heap see but few know approach. “Reading the stories of these women intrigued me. There is so much about these women that isn’t learned. I was so moved by each of them I had to create characters that addressed the common thread among them,” McCoy mused.

The thread she weaves is found in the scalp of a cherry-colored haired, unnamed, unwed, dream-deferred, 28 year-old character; a mother of three whose eldest child, a 13 years old girl is pregnant. “This character is a reflection of “a real woman somewhere,” McCoy said, adding, “the reflection of the blues.”

McCoy believes the impact of Michelle Obama’s presence in the White House is as a present hope for black women, especially, for misunderstood cherry-colored haired women. She cites Obama’s penchant toward upward mobility for her will to pursue personal and professional passions. “Michelle Obama is a dream catcher. A dream catcher is someone who makes a dream a reality. You have to have the imagination to see yourself beyond where you currently are,” she said.

A dream McCoy hopes for is to perform her act at the White House before November.

“If she made it into the White House, why can’t I?” she asked.

Next post FUNdraising Good Times: Wearing many hats is not bad