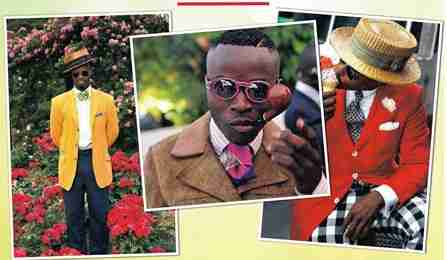 According to Shantrelle P. Lewis, ‘Black Dandies’ wear bright, tailored suits that redefine what it means to be black and masculine.

PHILADELPHIA — Seven years ago, Shantrelle P. Lewis was consumed by the negative images of young, black men being depicted in media as aggressive and dangerous.

Most looked nothing like the black men she knew: in her family, her social circle, from her college days at Howard University, or from living in New Orleans, New York or Philadelphia.

In response, the curator launched “The Dandy Lion Project,” a touring photography and film exhibit focused on black men in cities around the world with an aesthetic that incorporates European and African influences.

The project is now a book, “Dandy Lion: The Black Dandy and Street Style” (Aperture Foundation) celebrating the bold prints, bright colors and tailored style challenging society to reimagine what it means to be a black man.

Lewis discussed the project and the significance of “Black Dandyism” in a recent interview with The Associated Press.

Associated Press: How did “The Dandy Lion Project” come about?

Lewis: I was consumed with the negative stereotyping of black men, particularly in visual culture. As a curator, I wanted to respond, and my work definitely has a social justice component to it.

I decided on a photography exhibition about how particular black men were choosing to use their bodies as a form of resistance and oppositional fashion. I wanted people to be confronted with the same people they approach on the street every day, that they’re in the elevator with, that they’re encountering every single day in these global, urban environments.

The exhibition really speaks to the fact that blackness is not monolithic, that there’s these diverse narratives of black people. We have this subculture of style happening, from the heart of the Congo, to New Orleans, to Brixton in London, and also in Brooklyn.

AP: What is a “Black Dandy?” Where does that term come from?

Lewis: A “Black Dandy” is an individual who appropriates western European menswear and fashion, and introduces an African aesthetic to create something new, to express contemporary style. It comes from a European term to describe a specific class of what was called a “fop,” an individual who was obsessed with clothing and imitating, while also making a mockery of the mannerisms of aristocracy. These individuals were men of leisure and of various pastimes who were really obsessed with dress, and who also have very political views of society at large.

AP: What are some of the ssential components of Black Dandyism?”

But with young black andies, there’s also a hipop element. So they might air a vintage vest with an unollared Dutch wax jacket and ome Chucks or some Air orce 1s. There’s a transnaonal influence also present hat is not necessarily present traditional dandyism. For he Black Dandy, he’s pulling n all of these different asects of his identity and expeences as a black person.

AP: How does the “Black andy” reject the stereotype f the thug?

Lewis: I think it’s historical. I hink its roots are in repectability. Frederick Douass was one of the most hotographed men of his day.

ere is a formerly enslaved man having people document m … That was a tool he was sing to argue for the humany of black people. (W.E.B.)

uBois did the same thing ith his 1900 Paris Exposion, showing black, middleass, free people who are ducated, who are prosperus.

In a contemporary context, it’s really about younger black men who are rejecting this image that the corporate hiphop machine has come to dictate of what it means to be black and masculine. At one point in time, hip-hop was very oppositional.

It was protest music, it was coming out of urban youth culture.

Then it got co-opted. Now, there’s this “hyper-thug” image that gets played out in reality television and music videos. It’s a dress code connected to violence and hyper aggression. It’s an image of the black man as predatory that is now embedded in the minds of police officers.

AP: So does “Black Dandyism” work to counteract that?

Lewis: I don’t believe that dressing up in a suit is bulletproof. But I still think that it’s disruptive because they’re dressing outside of what’s typically appropriate for someone who’s young and black. That’s very disruptive, even in the black community. A huge part of it is also the pleasure aspect that’s involved in it. It’s a sense of pride.

When we look at the images of our forefathers and mothers … like in the Civil Rights Movement, you’ll see black people on the front lines dressed to the nines.

That’s coming from a long history of black people dressing up. In African culture, the ritual of dress is central to dignity, culture, pride … I think when contemporary dandies are dressing up, they’re pulling from this nostalgic moment where you had revolutionaries.

Malcolm X’s suit was sharp, James Baldwin, Dr. King. The way these guys presented … they were dressed extremely well. So this is about what it means to get dressed up, to put a lot of time and thought and energy into selecting ones clothes and presenting one’s self in public.

Learn more about “Dandy at Lion”

PLEASE NOTE: Errin Haines Whack is a member of AP’s race and ethnicity team. Follow her work on Twitter at http://www.twitter.com/emarvelous. 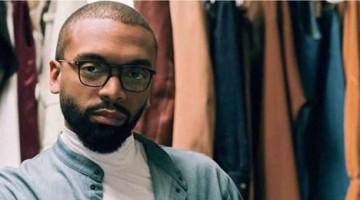