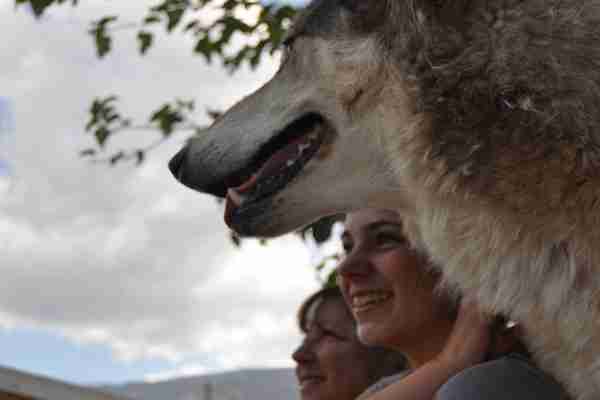 CHIPLEY—At Seacrest Wolf Preserve in northern Florida, billed as the largest such facility in the Southeast, owners Cynthia and Wayne Watkins say they raise their wolves to become accustomed to humans – and for a $25 fee, they even let visitors mingle with a wolf pack.

It lets wolves become ambassadors for their species, they say, and helps people become advocates for wolves.

“We offer one of the rarest opportunities in the world for humans to see wolves up close and personal,” Cynthia Watkins says. The Watkinses estimate that Seacrest, near the small town of Chipley, gets 10,000 visitors a year.

But some wolf experts worry that Seacrest may be allowing wolves and humans to get too close.

“They are still unpredictable because they are wild animals,” he said. “Wolves are not like dogs. Dogs have been domesticated for thousands of years and that unpredictability and wildness is taken out of them because of the breeding.”

A worker was attacked and killed by a pack of wolves in 2012 at a wildlife park in Sweden. A Canadian biologist was killed by wolves at the Haliburton Forest & Wild Life Preserve in 1996.

Seacrest requires visitors to watch an educational video before they interact with the wolves, has trained wolf handlers on hand during every tour and doesn’t allow children under 6 to take the tour, Watkins said.

“We are not some little roadside zoo,” she added.

The Seacrest preserve grew out of her passion for raising huskies, the sled dogs with a wolf-like appearance. That evolved into providing a home for wolves in need of relocation and later into a captive breeding program.

The 30 gray, Arctic and British Columbian wolves, with names including Utah, Rio, Liberty and Spirit Prince, are separated into packs. Each pack has several acres to roam. On a recent afternoon, Cynthia Watkins sat on a log bench surrounded by seven howling gray wolves. Watkins joined in their howling and pet and kissed each of them.

“Little Red Riding Hood was wrong and the wolf is not the bad guy but indeed a very important keystone species,” she said.

Seacrest also provides wolves to education programs around the country.

Pat Goodman, curator of Wolf Park in Battle Ground, Indiana, has worked with wolves for more than 40 years, and said Seacrest has a good reputation for raising healthy wolves that serve as ambassadors for their species in places around the country.

In Florida, thousands of miles from many of the wolves’ native habitat, Seacrest uses spray misters, large ponds and lots of shade inside the wolves’ densely wooded enclosures to help the animals deal with the heat and humidity.

The preserve is still recovering from a major flood in late April when heavy rains burst a dam on the property, washing out the wolf enclosures. The flood led to the death of one British Columbian wolf that escaped from its enclosure. It was shot and killed by a sheriff’s deputy after an extensive search for the animal led by Florida’s Fish and Wild Conservation Commission.

Stan Kirkland, a spokesman for Florida’s Fish and Wildlife Conservation Commission, said the deputy shot the wolf out of concern for public safety after officers spent days tracking the animal and trying to trap it without killing it. He said officers couldn’t get close enough to use a tranquilizer dart.

“You are talking about a 90- to 100-pound wolf escaping and we really were out of options,” Kirkland said.

The Watkins are petitioning Gov. Rick Scott to start an investigation into the death of the wolf.

The preserve has finished the most-crucial repairs needed to ensure the safety of the wolves, but more work needs to be done, she said. Seacrest has received donations and messages of support from around the world for the $100,000 rebuilding effort.

“All I could do was cry when I looked at how beautiful each enclosure was and how well thought out it was,” Watkins said. “The flood was extremely devastating.”

Chipley, Florida; seacrestwolfpreserve.org or 850-773-2897. Wolf encounter tours held every Saturday; gates open 11 a.m. Adults, $25; children 6-11, $15; children under 6 not permitted. See website for details on what to wear, when to arrive and VIP tours. Located about 85 miles west of Tallahassee and 115 miles east of Pensacola.