Black Americans gave thanks, even during slavery 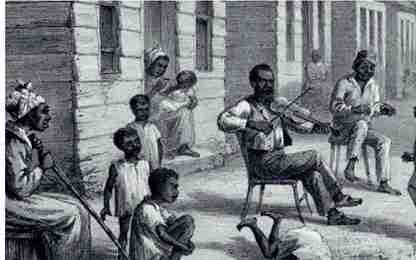 You’ll be hard pressed to find the face of an African American in any artistic depiction of that all-too familiar feast of 1621, like the one where a group of Plymouth colonists share an autumn harvest meal with some Wampanoag Indians.

That was just about the time when the earliest ships of Africans arrived as itemized cargo in America.

Nonetheless, African Americans have long embraced the honored tradition of Thanksgiving, even during slavery. When the Continental

Congress delivered a 1777 decree for the 13 colonies to give thanks for a victory over the British at Saratoga, African Americans took part in the regional celebrations, continuing in what had become a familiar custom of rejoicing for bountiful harvests and drought- breaking rains.

Field slaves caught wild game often accompanied by a serving of cornmeal while house slaves dined on leftovers from the “big house” after the slave-owners family finished their own feasts.

Similar to the Puritan practice of setting aside times for fasting and giving thanks, for many African Americans, any notion of Thanksgiving existed alongside the Christian faith.

“And one that had a kind of communal impulse in the sense of people gathering with the church as the epicenter.”

As some would say, Thanksgiving was about church. Thanksgiving Day sermons could be heard throughout black churches in Antebellum America as pastors gave voice to the fears, struggles, hopes and triumphs of a people who were still a commodity in an increasingly powerful nation. Many of these sermons openly mourned the institution of slavery, the suffering of black people and pleaded for the collective awakening of a slave-free consciousness in America.

Hosea Easton’s 1828 Thanksgiving Day Address to blacks in Rhode Island was nothing short of a dynamic diatribe against slavery and racism. In the speech, the multi-ethnic prominent abolitionist called for a “racial uplift” of the black race in America.

African Methodist Episcopalian cleric, Reverend Benjamin Arnett stirred a predominantly black congregation on November 30, 1876 with Biblically inspired words: ”…we call on all American citizens to love their country, and look not on the sins of the past, but arming ourselves for the conflict of the future, girding ourselves in the habiliments of Righteousness, march forth with the courage of a Numidian lion and with the confidence of a Roman Gladiator, and meet the demands of the age, and satisfy the duties of the hour…”

“Then let the grand Centennial Thanksgiving song be heard and sung in every house of God; and in every home may thanksgiving sounds be heard, for our race has been emancipated, enfranchised and are now educating, and have the gospel preached to them.”

The often-perceived conundrum of black slaves in colonial America giving thanks has baffled many, but perhaps justification and just maybe validation became more tangible after the U.S. Congress outlawed the importation of slaves into the U.S. and its territories on January 1, 1808.

Absalom Jones, one of the first African- American ordained ministers, delivered these words to commemorate the New Year of 1808: “Yes, my brethren, the nations from which most of us have descended, and the country in which some of us were born, have been visited by the tender mercy of the Common Father of the human race. He has seen the affliction of our countrymen, with an eye of pity. He has seen the wicked arts, by which wars have been fomented among the different tribes of the Africans, in order to procure captives, for the purpose of selling them for slaves.”

“He has seen ships fitted out from different ports in Europe and America, and freighted with trinkets to be exchanged for the bodies and souls of men. He has seen the anguish which has taken place, when parents have been torn from their children, and children from their parents, and conveyed, with their hands and feet bound in fetters, on board of ships prepared to receive them. He has seen them thrust in crowds into the holds of those ships, where many of them have perished from the want of air. He has seen such of them as have escaped from that noxious place of confinement, leap into the ocean; with a faint hope of swimming back to their native shore, or a determination to seek early retreat from their impending misery, in a watery grave. He has seen them exposed for sale, like horses and cattle, upon the wharves; or, like bales of goods, in warehouses of West India and American sea ports….”

“The ears of Jehovah have been constantly open to them: He has heard the prayers that have ascended from the hearts of his people; and he has, as in the case of his ancient and chosen people the Jews, come down to deliver our suffering country-men from the hands of their oppressors. He came down into the United States, when they declared, in the constitution which they framed in 1788 that the trade in our African fellow- men, should cease in the year 1808.”

But the ceasing of the buying of imported African slaves in America did not end what is sometimes referred to as America’s original sin, the institution of slavery.

It continued for more than half a century later.

That’s one reason why many freed black slaves immigrated to Africa, to the newly founded colony of Liberia. African-Americans took the tradition of Thanksgiving there, thanking God for their freedom and for the establishment of Liberia.

It’s not difficult to conjure a delightfully sublime mental picture, one of African Americans freed from slavery and colonial plantation life, celebrating Thanksgiving Day in the equatorial heat of Liberia. Perhaps they ate yams and collard greens or jall of rice and fufu with a pounded melon seed stew. Perhaps they danced to indigenous rhythms and sang hand-clamping, foot-stomp inducing spirituals.

Perhaps they, too, joined their African- American brothers and sisters who stayed awake throughout the night, just on the other side of the Atlantic Ocean, on December 31, 1862, to wait for Abraham Lincoln to sign the Emancipation Proclamation on New Year’s Day—a day that forever changed the course of the destiny of their lives.

Later that same year of 1863 in October, Lincoln signed the proclamation of a national Thanksgiving Day, unifying the various regional practices that had already been taking place throughout the nation.

“I do therefore invite my fellow citizens in every part of the United States, and also those who are at sea and those who are sojourning in foreign lands, to set apart and observe the last Thursday of November next, as a day of Thanksgiving and Praise to our beneficent Father who dwelleth in the Heavens.”

With these two enactments, the idea of a black family sitting at a table with a diverse assembly of nationalities (as depicted in the Thomas Nast November 20, 1869 Uncle’s Sam’s Thanksgiving Dinner cartoon in Harper’s Weekly) may not have been so radical after all.

But, imagine the sight of black churches after Lincoln’s proclamation…African- Americans, maybe still dazed from their year-shy statuses as freed slaves, sitting in church pews and harmonizing their voices together in a song of thanks.

After the popularization of James Weldon Johnson’s most famous song, a number of black church congregation members continued to lift their voices and sing until heaven rang on Thanksgiving Day church services throughout the nation.

And even though the tradition of going to church on Thanksgiving Day is not as commonplace as it once was— after the mass migration of African Americans to the North—the practice is still a cherished memory in the minds of some, like Patricia White.

An African American theater company manager based in New York City, White remembers celebrating Thanksgiving in Picayune, Mississippi with her grandparents in the ‘60s.

“We treated Thanksgiving like a Sunday and went to church in the day,” she said.

However, you choose to treat your Thanksgiving Day this year, it may not be out of place to give thanks for not only your own personal story, but also for the journey of blacks in America to give thanks, because certainly, it was a journey.

Previous post Is China the land of opportunity for blacks?