FOR MANY FAMILIES, ’TIS THE SEASON FOR MATCHING JAMMIES 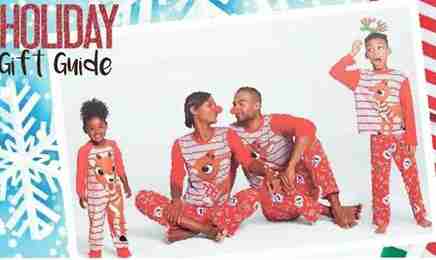 Amy and Kevin Wilson began giving their three sons matching pajamas at Christmas for a reason: They wanted their little ones to get excited about going to bed so that they, the adults, could get ready for Christmas morning.

Now, more than 15 years later, the pajamas have become a cherished family tradition, albeit a silly one. The Wilson boys – Jack, 20; Owen, 17; and Sam, 13 – have even pledged to continue the custom with their own families when they are older.

“A lot of people say to me, ‘I just can’t believe you get your kids to do that,’” says Amy Wilson, of Marietta, Georgia. “It’s really one of their favorite traditions. They never argue with me about wearing them. They’re excited to see what they are each year.”

Wilson has watched matching holiday garb become a trend thanks to social media. Photos posted on Facebook and Instagram show a huge variety of styles and patterns. In addition to traditional pajamas, Wilson has given her kids Star Wars and animal-themed sleepers. One year, she ordered the infamous bunny suit from the movie “A Christmas Story.” Another time, everyone received wearable blankets that were popularized by late-night TV commercials.

Matching outfits do make for an ideal photo op, says Danielle Lucia Schaffer, a blogger at citygirlgonemom.com. She dresses her four children in matching or coordinating pajamas every year and stages elaborate photo shoots.

The kids generally like the clothing but not the photos, said Schaffer, of San Diego.

In addition to wearing their matching jammies on Christmas Eve and Christmas morning, they put them on for movie nights all winter long.

It’s really important to get your husband on board,” she says. Whether you bribe him with his favorite meal or his favorite drink, she says, “when it’s two parents against the tribe, it’s going to work.”

Julie Aluotto of Sharonville, Ohio, says her kids like wearing pajamas that match their cousins. The two families, who live in different cities, took their outfits to a water park and ran around in them all weekend.

“We were our own little tribe,” says the mom of three.

Matching clothing is a way for families to strengthen their bonds and announce their connectedness, says Dimitris Xygalatas, an anthropology professor who studies rituals at the University of Connecticut. As families become more far-flung, dressing alike at the holidays may be a way to make the annual gatherings more fun and more over-the-top, he says.

“If your family only gets together once or twice a year, it needs to be significant – have more pageantry,” he said. “You need something that says this is a very special occasion. In a way, we’re compensating with a larger quantity of celebration for a lack of frequency.”

Next post FOR CRAFTY GIFTS, PAIR HOW-TO BOOKS WITH SUPPLIES