FRANCHESCA RAMSEY live and in color 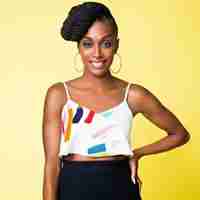 Michelle Villalobos will interview Franchesca Ramsey about her new book on May 24.

PHOTOS COURTESY OF BOOKS AND BOOKS

MIAMI – Franchesca Ramsey has built a career that began more than a couple of decades ago when, while in high school, she started her own blog before blogging was popular. She scanned photos and uploaded them to her site in what appears to have been the foundation to propel her into her current life as a comedian, writer, actress and “accidental activist.”

She has combined her “sharp, funny, and timely collection of personal essays (that explore) race, identity, online activism, and the downfall of real communication in the age of social media rants, trolls, and call-out wars,” into her first book, “Well, That Escalated Quickly: Memoirs and Mistakes of an Accidental Activist.”

The 34-year old New Yorker who grew up in West Palm Beach will be in South Florida to promote the new book. Michelle Villalobos, a personal brand strategist, a professional speaker, corporate trainer and founder of The Women’s Success Summit, will interview Ramsey about her new book and her journey to writing it on May 24 at 7:30 pm at Coral Gables Congregational Church.

Ramsey, 34, got her start on YouTube, and her big break came in 2012, with her video “Sh_t White Girls Say … To Black Girls.” In the parody, Ramsey wears a long, platinum blonde wig, and, in scene after scene, her character says things like, “Is it, like, bad to do blackface?” The video made her an online celebrity, providing a huge platform for her politically correct, identity focused comedy skits and commentary.

A 2015 deal with MTV allowed her to create and host the web show “Decoded,” now in its sixth season, where she creates similar videos addressing even more issues (xenophobia, classism and mental health stigma) for a broader audience. In an episode of “Decoded,” she plays an instructor at a “race ambassador” training and cheerfully promising to teach the group of people of color to navigate the “brand new, awesome responsibility” of representing an entire culture in their office or neighborhood.

For “Well, That Escalated Quickly…,” she uses her own experiences as an “accidental activist” to explore the many ways people communicate with each other–from the highs of bridging gaps and making connections to the challenges that come with talking about race, power, sexuality, and gender in an unpredictable public space…the internet.

Ramsey has been featured on NPR, Anderson Cooper, CNN, MTV, the BBC, and in the New York Times. A former writer and correspondent for The Nightly Show with Larry Wilmore, she now has a major late-night television show in development with Comedy Central.

WHAT: Michelle Villalobos in Conversation with Franchesca Ramsey

Next post 'This Is America' SEALS GLOVER'S REP AS PROTEST ARTIST