Ghostbusters reboot is more than a chick flick 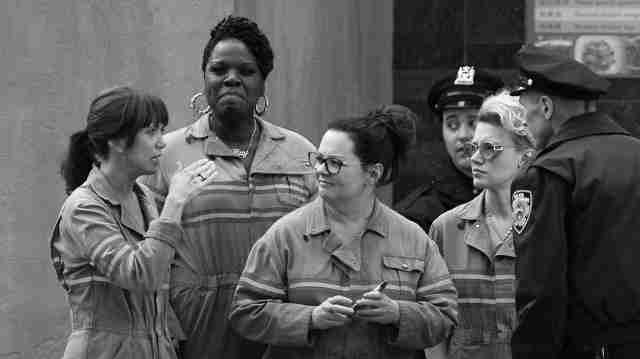 What constitutes a chick flick? Most people would say any film where the female has top billing; which isn’t often unless it’s a romantic comedy. Writing a film off as a chick film because of its lead actors, however; does a disservice to the film as a whole. It shouldn’t matter who has top billing. A good film is a good film.

Case in point, the reboot of Ghostbusters, which was put into action from the man who gets that women have more to offer than just playing the girlfriend role: Paul Feig (Bridesmaids, The Heat, Spy). He clearly likes working with Melissa McCarthy.

Feig teamed up with Katie Dippold (based on the original story by Dan Aykroyd and Harold Ramis) to create four strong women who ain’t afraid of no ghost and actually welcome a paranormal interaction. Those characters are even fully fleshed out and enjoy an instant sisterly bond. Although it could be classified as a chick flick, it’s not so feminine that men can’t enjoy it, too. These characters stand out in all the right ways.

Erin Gilbert (Kristen Wiig) is a science professor and a people pleaser who’s trying not to be the crazy ghost lady. Abby Yates (McCarthy) is the brains of the operation and their unofficial leader. Jillian Holtzman (Kate McKinnon) is two cupcakes short of a mad scientist who, thankfully, uses her powers for good. And, soon-to-be everyone’s favorite Ghostbuster, Patty Tolan (Leslie Jones), is a New York transit worker that keeps the group grounded and has some of the best lines in the film. Her knowledge of New York’s history is priceless.

Other actors of note include Chris Hemsworth as dummy assistant Kevin. Charles Dance (Tywin Lannister from Game of Thrones) plays uppity professor Harold Filmore with the same disdain he used in GOT. Neil Casey plays a paranormal terrorist named Rowan North who is no cupcakes away from being a mad scientist. Ozzy Osbourne plays himself beautifully. Michael K. Williams plays skeptical FBI Agent Hawkins who gets paranormal in a comical way. And, actors from the original Ghostbusters films make cameos as a way to pass on the torch to these young ladies: Bill Murray, Ernie Hudson, Dan Aykroyd, Annie Potts, and Sigourney Weaver. Slimer even plays a key role in the film.

Story wise, the four ladies kill it as a burgeoning ghost hunter company with the odds against them. No one wants to fund the irresearch. No one thinks they can do it. And, no one wants to think about ghosts running around Manhattan, New York.

Nevertheless, this quartet brings on the laughs with their individual styles, quirkiness, and talents. Sure, the only black female of the group is not a scientist like the rest and it’s annoyingly pointed out; but she’s seems to be the only one with good sense.

Concurrently, Jones breaks out in this film and dares others to stereotype her as the token black woman that she’s not. Patty is way more than that and so is the new Ghostbusters. It breaks with the norm of a standard chick flick. None of our ladies is looking for love in the big city like Carrie Bradshaw and these ladies aren’t about conforming to be appealing to men. They’re just vibrantly funny women who don’t need a kiss at the end to make it a good film.

I like what Feig has done with this comical reboot and with his other good films that have women in mind (Spy). Rebooting a popular franchise with an all-female cast makes this latest Ghostbusters feel fresh and able to stand alone from its predecessor. Feig gets that we need to see strong sisters doing it for themselves, standing on their own two feet, bringing home their own bread; so much so that I’m actually looking forward to the sequel.