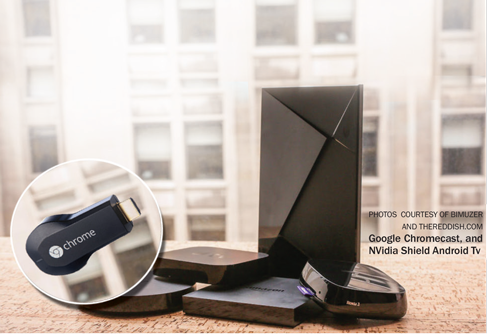 NEW YORK (AP) — Watching video on a phone or personal computer can sometimes feel less than awesome – not to mention kind of lonely, given the limited viewing angle of the small screen.

There are plenty of ways to get streaming video onto your big living-room screen. Internet-connected “smart” TVs and gaming consoles such as the Xbox or PlayStation can do the trick. But stand-alone devices tend to offer more features and more video services to choose from.

These three leading devices all stream Netflix and YouTube, and most also handle Hulu, PBS and several others. Only Apple TV has iTunes, while only Roku has both Amazon and Google Play. Whichever device you choose, you’ll still need subscriptions to watch most of the services we checked.

The TiVo is first and foremost a digital video recorder, offering many features that cable-company DVRs can’t match.

TiVo recordings have many advantages over streaming services such as Hulu. One tap of the remote skips over the entire commercial break for many prime-time shows. Hulu won’t let you skip commercials at all unless you pay more. TiVo can also play back shows 30 percent faster using its “QuickMode.” Use both, and an hour-long show takes less than 35 minutes.

As a streaming device, though, TiVo is more limited. It offers only four of the leading streaming services we checked –Netflix, Amazon, YouTube and Vudu. Hulu is coming soon. Apps for many specific channels, including HBO and Showtime, are unavailable, nor is baseball’s MLB.TV. TiVo figures you can simply record those channels or use your cable company’s on-demand service, but that doesn’t help if you have only an antenna.

The Bolt offers 75 or 150 hours of recording. A 450-hour TiVo is available for $600, but it’s an older model, without QuickMode or commercial-break skipping.

The Chromecast is an odd hybrid – a gateway to relay streaming video from your laptop, phone or tablet to the TV. Choose a video source – say, the Netflix app or website – and make a few taps to “cast” it to the TV. The Chromecast then picks up the video stream directly.

Chromecast doesn’t work with every video app, but has 10 of the 12 services we looked for; iTunes and Amazon are no-shows, at least from mobile devices. It has no remote; you control playback through your phone or tablet. The Chromecast is cheap, but it’s not as versatile as a stand-alone device.

For music and podcasts, the $35 Chromecast Audio can “cast” to speakers.

The Shield’s strength is as a video-game console. It’s fast and powerful, and it has a good selection of converted PC games. The device also supports Nvidia’s GeForce Now streaming-game subscription. Games run on distant servers, yet feel as though they are directly on the Shield.

The Shield uses Google’s Android TV streaming service, which offers eight of our 12 streaming services. There’s no Amazon, iTunes or Watch ESPN app. With Chromecast-like casting, you can get Vudu. You can get ESPN with a Sling TV subscription and app.

The Shield is expensive for a streaming TV device, but it’s cheaper than a game console. It comes with a game controller.