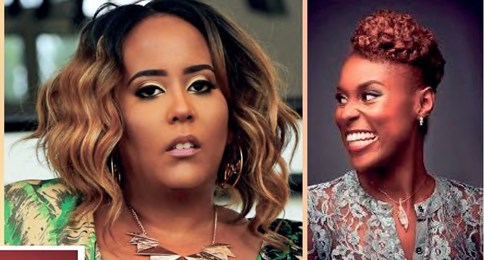 MEMPHIS, Tenn. (AP) – Memphis author, screenwriter and playwright April “Skyy” Blair decided 2018 would be her “year of yes,” a leap of faith to start saying yes to things she normally would not consider.

That year culminated with her winning a nationwide contest offering the chance to turn the winner’s script into a television pilot.

Blair, 36, had already planned to attend Miami’s 2018 American Black Film Festival (ABFF), held in June, when she heard about the Script to Screen competition. BET and ColorCreative launched the competition to find an emerging, diverse writer with an original comedy or drama pilot.

Blair’s script, “CURVES,” was chosen from more than 1,500 submissions. Its synopsis: The story follows “three Rubenesque, African-American women struggling to navigate the world at large and a particularly prickly dating scene as plus-sized women in Memphis.”

Blair had been working on the script for four years. She wanted to create a work where plus-sized women would not be shown as a funny sidekick or depressed.

She describes “CURVES” as “Sex and the City for big girls.”

At ABFF, the competition’s three finalists – Blair, Darnell Brown and Baindu Saidu – participated in roundtables, as well as a private luncheon with BET and ColorCreative executives.

“We met the head of BET and Issa Rae,” Blair said. “Different producers and showrunners talked to us about being in the business and what would come next.”

She described the ABFF events as instrumental and instructive, rather than serving just as networking sessions.

“I’m from Memphis, we don’t have as many resources, as my fellow finalists,” Blair said. “They live in L.A.”

Blair has been writing scripts for years, she said. She just has not been doing anything with them.

The author’s first novel, “Choices,” was released in 2006. So far, Blair has published four novels in that series. She has been featured in three anthologies and her most recent novel, “Southern Comfort,” debuted in first place in Amazon.com’s lesbian fiction category.

Her first short film, “Motions,” was screened at the 2018 Indie Memphis Film Festival and was a winner in Outflix Film Festival’s 2018 short film competition.

Deniese Davis and actress, producer and writer Issa Rae founded ColorCreative in 2015 to raise awareness for diverse writers, as well as provide a springboard to their careers by producing and selling their work to digital, network and cable platforms.

In a release, Davis, ColorCreative COO, said that partnering with BET to find a compelling and unique story by an emerging writer had always been on the company’s checklist.

“As soon as we read Skyy’s submission we knew that she would be one of our finalists,”

Davis said. “Her willingness to be vulnerable and open in her writing and share a narrative we rarely see on the small screen is exactly the kind of story ColorCreative wants to get behind. We are so excited to go into the next phase of development with her as well as our other two finalists.”

“I’m definitely excited,” Blair said. “I’m looking forward to whatever’s next. I’m proud to represent Memphis because the television show is definitely heavily based in Memphis.”