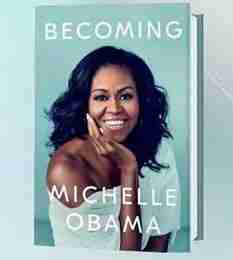 NEW YORK (AP) – Check out the upcoming events at Chicago’s United Center and you’ll see Bulls games, Blackhawks games and concerts by Fleetwood Mac, Nicki Minaj and Cher, among others. And former first lady Michelle Obama, to launch her book tour in November.

Just for the scale of its venues, there has never been a rollout quite like the one for Obama’s memoir “Becoming,” with stops including the Pepsi Center in Denver and American Airlines Center in

Dallas. While popular authors have been likened to rock stars for years, Obama is the first to promote her book on a scale common for top musical performers, even using the entertainment company Live Nation.

“Mrs. Obama wanted to make her tour as accessible as possible,” Tara Traub, senior vice president of Live Nation Touring, said in a statement Friday. “The Live Nation team also knew the demand for her tour would be extraordinary. For these reasons, we knew an arena tour would maximize the number of people who will be able to join this unforgettable conversation with Mrs. Obama.” While the traditional bookstore reading is usually free and might be called a success if a few dozen show up, Obama’s appearances will be at venues of 15,000 and higher in capacity, with tickets that range from just under $30 to $3,000. (VIP tickets include the chance to meet Obama.)

Despite some complaints on social media abo ut prices, tickets have been selling so quickly that this week Live Nation added two additional events, at Barclays Center in New York City and Capitol One Arena in Washington.

“Truly humbled by the response to my upcoming book tour,” Obama tweeted Thursday.

Some fans will attend for free. According to Traub, 10 percent of tickets at each event will be donated to “local charities, schools and community groups in each city the tour visits.”

“This was a priority for Mrs. Obama and we are proud to collaborate on this effort,” she said.

In the top 10 on Amazon.com weeks before its Nov. 13 release date, Obama’s book seems a guaranteed million-seller _-a memoir by a popular first lady with an international following and a relatively limited history of discussing her private life, especially her eight years in the White House. Books by former first ladies have often sold well, with previous releases including Hillary Clinton’s “Living History” and Laura Bush’s “Spoken from the Heart.”

Obama’s tour begins the week after the midterm elections. While former President

Barack Obama has endorsed dozens of Democrats and increased his criticisms of President Donald Trump, Michelle Obama’s involvement has focused on the nonpartisan When We All Vote, an initiative encouraging people to register.

Advance promotions for her book have emphasized that she will chronicle “the experiences that have shaped her – from her childhood on the South Side of Chicago to her years as an executive balancing the demands of motherhood and work, to her time spent at the world’s most famous address.”