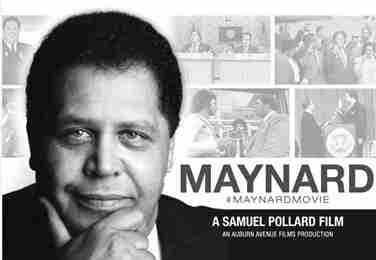 ATLANTA, Ga. — MAYNARD, the much-anticipated documentary film, which is being made about the life and times of former Atlanta Mayor Maynard H. Jackson, is turning the power on and moving full-steam ahead into post production.

Thanks to the award-winning documentary filmmaker, Sam Pollard, the work of Auburn Avenue Films, Inc. and the perseverance of Maynard Jackson III, Wendy Eley Jackson and the production team, final interviews have occurred in Atlanta, Jackson’s hometown.

Former Atlanta Mayor Shirley Franklin; Jackson’s widow, Valerie Jackson; Jackson’s children; Douglas A. Blackmon, former AJC reporter and Pulitzer Prize-winning author of “Slavery by Another Name,” his first law partner, Andrew Patterson; his former CAO at Atlanta City Hall, George Berry; and many other individuals who played major roles in the life of this giant of a man have been in front of the camera.

The mayor’s aunt, June Dobbs Butts (the only living daughter of Jackson’s grandfather, John Wesley Dobbs, who was often referred to as the mayor of Sweet Auburn Avenue), provided an applauded interview to round out the history on the Dobbs family.

Pollard, the film’s director and the creative mind that is leading the production, will continue filming evocative imagery in and around Atlanta this month (February). Other special interviews are in the works which include President William “Bill” Clinton, former Atlanta Mayor Sam Massell and Dr. Michael Lomax, president of the United Negro College Fund, who once served as a speech writer for the mayor during his first term in office, as well as the Commissioner of Parks & Recreation for the city.

Post production is scheduled for the months of February/March; and then on to the plans of getting the film ready for submission at the Sundance Film Festival in January of 2018.

The MAYNARD documentary trailer was recently presented during the “Choose Georgia Film Making in the South” event at the 2017 Sundance Film Festival recently held in Utah.

“We received outstanding support for our efforts while at Sundance,” said Wendy Eley Jackson, with Auburn Avenue Films. “We went to Sundance to have a presence at the table and to begin the process of making more connections within the industry – which we accomplished.”

The documentary will present an intimate view of Jackson from those who knew him best, such as Ambassador Andrew Young, Vernon Jordan and his childhood friend Sammy Bacote.

The film will include video archival footage and rare photographs. The interviews with family and co-workers who helped sustain the Maynard movement during his terms as mayor and beyond will detail the full story of Maynard — the man, the mayor, the game changer and the politician.

“How did Maynard do it?” is the question that the documentary will answer. In addition to being referred to as “Action Jackson” from time to time, Mayor Jackson was known as an articulate, charismatic and compassionate leader who served a record three terms as Atlanta’s mayor.

Among his many successes, he earned his place in Atlanta history books for building the world’s busiest airport and is known nationally for developing a model for affirmative action programs that was used in cities around the United States.

Georgia Public Broadcasting (GPB) will serve as the presenting station for the film and an educational partner for MAYNARD. This partnership will insure that the history lessons of Jackson’s three terms tie into GPB’s extensive educational programming.

These lessons, about Atlanta’s first African American mayor, will be provided in perpetuity for students through the GPB Education curriculum which is offered to both teachers and students.

Henry Adebonojo, whose film “I Am Not Your Negro” received an Oscar nomination for Best Documentary Film Feature Category, is also the director of photography for the MAYNARD documentary.

For more details about the film, visit www.maynardmovie.com.