Get Out is satiric comedy masked as horror film film 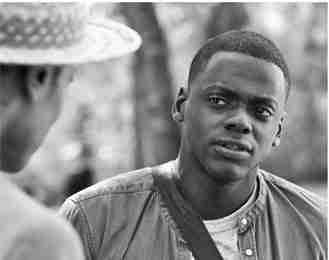 Is “Get Out” a horror movie or an epic satire? It’s hard to tell because it’s produced, directed and written from the mind of Jordan Peele (one half of the men who brought us Comedy Central’s “Key & Peele”). Both Key and Peele have a tendency to do off-the-beaten-path-yet-social-commentary comedy (see kitty cat gangster comedy “Keanu” for reference).

However, there are enough funny moments in “Get Out” to make the audience feel like they’re getting the “Key & Peele” experience. I’ll elaborate.

While in Upstate New York at Rose’s parents’ estate, Chris notices some things seem out of place and that Rose’s parents, Missy (Catherine Keener) and Dean (Bradley Whitford), seem to be trying too hard to seem un-racist; which is usually a dead giveaway that a little bit of racism is present. And, yes, that’s a thing.

And, then there’s Missy’s need to hypnotize everyone she meets. She has an ulterior motive and as a director, Peele uses Missy’s abilities to bring just enough scary to keep the audience on edge without making them scream like children. Meanwhile, in the story, Chris notices that Rose’s parents aren’t the only ones trying hard not to appear racist. Their neighbors, who visit for an annual backyard party, are just as peculiar; none more than Andrew Logan King (Lakeith Standfield).

Andrew, a black man from New York and a friend of a friend of Chris’ friend, has been missing for the past six months and doesn’t seem like himself. As a matter of fact, every black person that Chris encounters appears to be on some kind of mood enhancing drug.

Here’s where the satire comes in. (Spoiler alert in the next two paragraphs!) As a writer, Peele addresses all of the wild, far-fetched claims of black people turning into Uncle Toms.

The African Americans that Chris encounters on the estate are scarily happy and seem to be content to be basically slaves.

Whenever Chris makes mention of racial differences within their surroundings to the black servants, they don’t seem to understand what he’s talking about. And, Andrew even goes so far as to say that he doesn’t see any issues with racial inequality in the U.S. Naturally, given the current climates of the United States, the United Kingdom and Mexico, racism is alive and well.

Concurrently, the Armitage family’s friends and neighbors are too interested in Chris’ overall blackness (from his dark skin, to his height, to his muscular build, to the stereotypes of black men being good in bed). He’s basically a sideshow for them; which is how many black people feel when they are the only blacks in a room.

They feel that they have to represent every African American in America.

This is ludicrous. Just as all African Americans come in different shapes, sizes, skin tones and hair textures; they also have their own personalities like any other red-blooded human being. It’s one of the themes that I think Peele is trying to implore to his audience: stop making us into sideshows and start seeing us as regular human beings like everyone else.

Honestly, the entire movie, which was a Sundance Film Festival darling, is a unique social commentary on African Americans and how they are treated and mistreated by their nonblack counterparts.

It’s also an entertaining mystery with a nice twist at the end. Peele takes the mismatched pieces of the storyline puzzle and fits them into place in a way that leaves the audience analyzing every character’s actions and anything else that may have been overlooked. It’s a testament to Peele’s ability as a writer/director. He has created a dialogue about race and how we see “others.”

So, in answer to the original question, “Get Out” is more like a comedy masquerading as a horror film (i.e. an engaging satire). It pokes fun at racism and gives the audience a good mystery to gnaw on long after leaving the theater. Meanwhile, Peele gets to show off his auteur prowess and solidifies himself as a filmmaker.