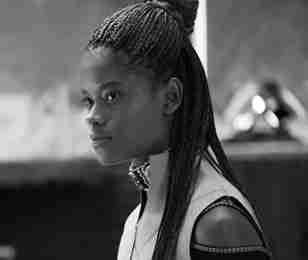 One of the most refreshing aspects of “Black Panther” is the way black women are depicted on the big screen. The Marvel movie features women who are not only beautiful, but also multidimensional with strength, intelligence, humor and talent. One of those characters, Shuri, played by Letitia Wright, has earned the well-deserved nickname of “scene stealer,” with her infectious charm, wit and brilliance.

In a telephone interview, the 24-year-old Guyanese actress said being a part of this monumental cinematic experience is “really dope. It’s a really big blessing.”

Wright said an intention of the cast and crew was to have audiences feel excited about “Black Panther.”

“It means a lot to us to have everybody’s support. To have everybody feel so excited, that’s literally what we worked for. Just to tell the truth in the story and to bring something to the world that could make a difference.”

She laughs at being called a “scene stealer.”

“Everybody did such an amazing job. I’m so proud to be a part of the cast and crew. I’m so grateful to have worked with everybody,” said Wright, who broke onto the scene in the film, “Urban Hymn,” an award-winning 2015 British coming-of-age drama.

The significance of playing Shuri isn’t lost on her. Shuri is Black Panther’s sister and a princess of the Wakanda.

“It’s not a character you see so many times. She’s a three-dimensional character; she’s not just one way.” Although a supporting role, Wright said, “For the world to receive her along with Black Panther, along with Killmonger, not in the background,” is fulfilling.

She added, “I hope it inspires young girls, as well.”

Wright said she was inspired by working with the film’s other women (Lupita Nyong’o, Danai Gurira and Angela Bassett).

“It was refreshing to work with such amazing women, ahead of their game. Champions for change all bringing their ‘A’ game every day on set. All were amazing to work with, to watch their dedication and hard work.”

The young actress landed her role in “Black Panther” the usual way. “Auditioning, sending tapes, doing screen tests, meeting Ryan (Coogler), meeting Chadwick (Boseman),” she shared. “And everything kind of fell into place after that.”

As a relative newbie, Wright said it was wonderful working with Coogler, who, with “Black Panther,” co-wrote and directed the first predominantly black and highest-reviewed Marvel movie.

“He was very supportive. He never made me feel like I was below anybody because I don’t have the accolades that everybody else has or I’m not an Oscar nominee. He welcomed my opinions and my ideas.”

A fan since Coogler directed the critically acclaimed “Fruitvale Station,” Wright said she can now scratch his name from a list of directors with whom she wanted to work.

“He’s got a really bright future. There’s so much more. I don’t think we’ve seen anything yet. If he was given two years to make “Black Panther,” it would be even crazier than it is now. That guy is loaded with so much talent,” she said.

She’d love to work with Coogler again, she said; but first, Wright plans to take a vacation and ponder her next move.

“I’m going to think about what the next project should be and what’s right to do next,” she shared.

Next post ‘Can you dig it?’ Africa reality show draws youth to farming