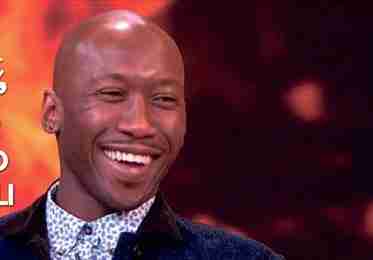 LOS ANGELES – Mahershala Ali’s universe is expanding, personally and professionally. After almost 20 years as an actor, he’s attending his first Academy Awards as a star of two of its best picture nominees: he’s Taraji P. Henson’s love interest in “Hidden Figures” and he’s favored to win the supporting actor Oscar for his portrayal of a compassionate drug dealer in “Moonlight.”

Meanwhile, Ali is also preparing for first-time fatherhood with wife Amatus Sami-Karim, the artist he fell in love with while studying for his master’s degree at New York University in 2000. They married in 2013, and her pregnancy paralleled his rising profile this awards season.

The 43-year-old actor talked with The Associated Press about why he finds the convergence of his personal and professional milestones grounding, the role music plays in his performances and what he wants to do next. The interview has been edited for clarity and brevity.

AP: How are you juggling awards season with the expansion of your family?

Ali: Having a child is the polar opposite experience of the awards season experience. The awards season experience … requires you to be out in the community, in the heart of the community, at the nucleus of the film community in a really committed way for about a sixmonth period of time. Having a child requires you to nest, to be in your home, and to create and make your home and environment … one that is potentially very welcoming and nurturing for a child. … The pregnancy has been a real anchor for me to be able to check in.

AP: You’re working on Robert Rodriguez’s big sci-fi film, “Alita: Battle Angel.” Have you been shooting while all this is going on?

Ali: I literally just wrapped (last week) in Austin, Texas. I really loved working on that job, but I’ve never enjoyed working on a project so much and wanted to get home so bad at the same time.

AP: You’ve said you make playlists for each character you portray — music they might listen to or that helps you get into their headspace. Are you doing the same thing for your new role as a dad?

Ali: There’s stuff that will pop up for me that makes me think of our child or the hospital, things that feel right for that vibe and the energy that you want in the hospital and even after the baby’s born. … I was telling my wife the other day that, knowing my father (late Broadway performer Phillip Gilmore), they must have been playing a lot of music when my mom was pregnant, or like right after I was born, because my connection to music is so strong. I cling to it. I vibe out to it. I release stress to it.

Music is really always close to me. It’s really present in my work in terms of how I relate to characters is through rhythm and sound, even in their speech.

AP: What about your ultimate job — after fatherhood, of course — you want to play Marvin Gaye?

Ali: I would love to be able to connect with the family about that and, first and foremost, to have their blessing. Because that would be a dream role. I am such a fan and admirer of Marvin Gaye: the man and the musician and the artist. … I would love dearly to do that project and bring some aspect of Marvin Gaye’s life to the screen and to assist and participate in that. That would be a dream come true.