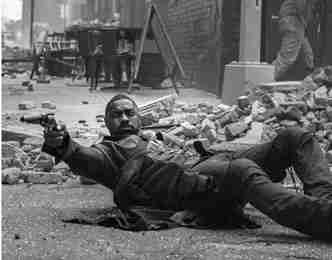 Idris Elba stars as Roland Deschain, battling to avenge his father’s death in the movie adaptation of Stephen King’s series of sci-fi novels, “The Dark Tower.”

Ah, August. It’s that time of year when you can head to your local multiplex to see Matthew McConaughey as an interplanetary David Copperfield who’s trying to use his “magics” to destroy a looming tower that protects the universe from ready-to-invade hordes of demons that linger just outside the universe. so, I guess, pretty far out there in space.

To be fair, this August boasts some of the more intriguing films of the summer, like steven soderbergh’s triumphant return (“Logan Lucky”) and Kathryn Bigelow’s furious race-riots docudrama (“Detroit”).

“The Dark Tower,” though, is the more traditional late-summer offering: a long-in-development, not-ready-for-prime-time studio dump.

A litany of directors, including J.J. Abrams and Ron howard, has tried to crack stephen King’s magnum opus, a series of seven novels he wrote over more than two decades.

But after much shuffling, “The Dark Tower” has finally arrived via director Nikolaj Arcel, who penned the 2009 swedish adaptation of “The Girl With the Dragon Tattoo” and helmed the 18th century Danish period drama “A Royal Affair.”

The special effects-heavy fantasy is a leap in production size that outstrips Arcel. The film, at a lean 95 minutes, has the unmistakable air of a mitigated disaster. Its scope and running time have seemingly been reined in to keep “The Dark Tower” from completely toppling.

What’s left is an elaborate and grand scheme told briskly but emptily – like if someone tried to explain the hBo series “Westworld” in 30 seconds or less.

“Westworld” surely took some of its inspiration from “The Dark Tower,” a soupy mix of sci-fi, horror, Western and Arthurian legend. The elaborate concoction of genres – it’s King to the max – would likely humble most any filmmaker. We have, as a civilization, found a way to marry Taco Bells with Pizza huts, but the combo of wizards and cowboys remains a vexing one.

After a brief hint of what’s to come, the movie opens in modern New york City with a young teenager: Jake Chambers (newcomer Tom Taylor). his dreams are plagued by visions of an alternate world, Mid-World, where he sees a gunslinger named Roland Deschain (Idris elba) battling the Man in Black (McConaughey), who’s hell-bent, for reasons unknown, on ending the universe.

Jake furiously sketches his visions, prompting his sensitive but uncertain mother (Abby Lee, the best and most natural thing in this mess) and comic-book-cruel stepfather to agree to send him to a psychiatric retreat upstate.

But when two arrive to retrieve him, Jake observes a feature in their faces from his dreams: the stitches of false skin. he flees and improvises his way to a building from his visions that turns out to be a portal to Mid-World.

“This is good,” he says. “It’s all real.” he tosses in a shoe as a test and soon thereafter plummets in.

There he quickly runs into Roland, the stonefaced, duster-wearing gunslinger with a sixshooter in a land with minimal guns or bullets.

The name comes from King’s inspiration, the Robert Browning poem “Child Rolande to the Dark Tower Came,” and King’s Roland has a grim quest of his own: to avenge the Man in Black for murdering his father.

Jake, we learn, will play a pivotal role in the battle that will decide the fate of both worlds – MidWorld and, as Roland calls it, Keystone earth. his “shine,” we are often told, is strong and pure.

elba is, as usual, a powerful force on the screen who deserves better. McConaughey’s character, though, is more outlandish. Thanks to his team of henchmen, the Man in Black zips between worlds like no one else.

his dark powers are such that he can catch bullets between his fingers and, to nearly all but Roland, give flip commands like “stop breathing” and the victim will promptly keel over. If only he could stride past the movie, itself, and order “Better.”

But “The Dark Tower” is never quite a punchline. such actors as elba and McConaughey are too good, the youngster Taylor acquits himself well and the tale is on fairly stable ground while on Keystone earth. Mid-World and its necessary special effects, however, not so much.

Reaching half-heartedly for the epic only makes “The Dark Tower” appear all the smaller, especially as it jumps back and forth between alternate worlds. you begin to hope that midway to Mid-World, McConaughey and elba will just call time out and start acting out a new season of “True Detective” together.

“Dark Tower,” a Columbia Pictures release, is rated PG-13 by the Motion Picture Association of America for “thematic material including sequences of gun violence and action.” Running time: 111 minutes. Two stars out of four.