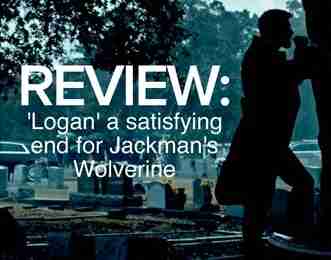 “Logan” is not for the faint of heart – not just because of its brutal violence, but because it packs an emotional wallop you don’t typically expect from a comic-book movie.

Featuring Hugh Jackman’s final turn as Wolverine, “Logan” isn’t a shiny, colorful, superhero-style film, either. It’s gritty, dark, and a deeply satisfying conclusion for fans who’ve followed the clawed character through Jackman’s past eight movie outings with the X-Men and alone as Wolverine.

Writer-director James Mangold, who also directed 2013’s “The Wolverine,” clearly loves the character as much as Jackman does, and both seem liberated by this film’s R rating. “Logan” is not a kids’ movie. It’s viscerally violent – lots of claws-through-the-face shots –and emotionally profound as it explores the relationship between Logan and Professor X (Patrick Stewart).

Viewers would need some basic familiarity with these characters to fully appreciate the story told in “Logan.” If you don’t know anything about the relationship between the title mutant and Charles Xavier (Stewart), the arc they experience in this film would be far less impactful.

(The quick version: Professor X is the de-facto leader of mutants, who most appreciates them and their powers. Logan has resented the immortality that comes with his mutant-ness, and has a lot softer heart than his claws would indicate.)

It’s the near future, and Logan is a hard-drinking limo-driver for hire. As one of the few remaining mutants, he keeps a low profile while caring for an aging and ill Professor X, who’s hidden in a secret silo just south of the Mexican border.

Half the time he babbles nonsense, but the professor tells him there’s a young mutant coming their way, and soon they’re charged with Laura, a little girl who doesn’t speak but has deadly claws like Wolverine.

A slick-looking villain with a “Terminator” hand (a perfectly smarmy Boyd Holbrook) is interested in this young mutant as well. She was part of a pseudo-military genetic research project led by the evil Dr. Rice (Richard E. Grant, even smarmier).

Laura (entrancing newcomer Dafne Keen) is planning to meet the other kids Dr. Rice experimented on in Eden, a place they read about in an X-Men comic book. So meta.

Thus the story becomes a road movie, with Logan, Laura and Xavier comprising an endearing and offbeat family on their way to Eden as they try to outrun Dr. Rice and his goons. Logan is reluctant and disinterested, Xavier is kind and a little kooky, and Laura is mute.

Laura is also a killer badass, and Keen makes her so fun to watch. Imagine Wolverine’s powers in a pint-sized, ponytailed package.

Between the 11-year-old’s performance and flawless special effects, Keen’s fight scenes are as thrilling and bloodletting as any of Wolverine’s.

And Jackman doubly delivers as Wolverine. You’ll see what I mean when you watch the film. He is in top form as both an action star and an actor, bringing heart to his dramatic scenes and wielding unmatched adamantium power in the action sequences.

Beyond the claws, there’s also some cuttingedge car play, including a throw-down between a limo, two motorcycles and a barbed-wire fence. Mangold also manages to work in an anti-GMO message about a Monsanto-like company and pay tribute to classic cinema with a nod to the 1953 Western, “Shane.”

“Logan” is a family drama, an action thriller and an epic superhero story. If this is indeed Jackman’s last Wolverine film, he’s going out in heartfelt, high-class style.