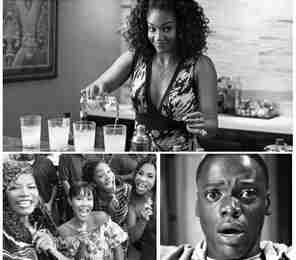 PHOTOS COURTESY OF TOOFAB AND YOUTUBE.COM

LOS ANGELES— From Tiffany Haddish and that grapefruit to Wonder Woman taking on No Man’s land by herself, here are the 10 movie moments from 2017 that we can’t stop talking about.

Goosebumps. I still get goosebumps thinking about Gal Gadot emerging from that trench and walking confidently with a steely calm into that empty and unwinnable field, swatting bullets away with her golden bracelets and giving hope not only to those counting on her in the film but to every woman in the audience too.

THE SUNKEN PLACE, “Get Out”

She hypnotizes him stirring her tea methodically and suddenly he is trapped and falling in horrifying space. On a superficial level, it made an impact as a straight horror technique, but the sunken place went even deeper than a scare tactic: Peele later explained that it represents the marginalization and silencing of African Americans.

Sometimes a single scene is so rich, it could be an entire film. That’s the case with stuntman Terry Notary in Ruben Ostlund’s “The Square.” Notary plays a man who for his performance art, acts like an ape. He’s been chosen as the entertainment for a group of well-heeled museum investors, but the interactive bit at a fancy dinner doesn’t go as planned as he intimidates and terrorizes the nervous guests.

ELIO CRIES, “Call Me By Your Name”

It is the very last shot of the movie (spoiler alert!), but it is also what that entire impossibly beautiful film is leading up to: Elio (Timothee Chalamet) heeding his father’s advice and really feeling the loss of his summer romance with the impossibly beautiful Oliver (Armie Hammer). Director Luca Guadagnino lets the credits roll as he keeps the shot close on Chalamet’s face, gazing into a fireplace while Sufjan Stevens sings and life goes on around him.

You know, just some casual conversation with your ex-girlfriend’s parents who hate you but you’re all stuck together in a hospital cafeteria because she’s in a coma.

Greta Gerwig’s “Lady Bird” is bursting with humanity and humor in every frame so it’s hard to choose a single moment, but Laurie Metcalf having a real-time change of heart about getting out of the car to say goodbye to her only daughter, who is leaving for college, while circling the Sacramento airport is pretty stunning. Just give her the Oscar already.

ROONEY MARA AND THE PIE, “A Ghost Story”

It is not necessarily supposed to be funny when Rooney Mara, in a bizarre moment of grief over the death of her husband, eats an entire pie in one take in David Lowery’s “A Ghost Story,” but awkward laughter is just one of the many emotions you experience watching her stab at the pie pan with a fork. It was made even better when Mara revealed that she’d never actually eaten pie before.

Jennifer Lawrence didn’t get enough acclaim for her performance in Darren Aronofsky’s “Mother!” The movie’s divisiveness overwhelmed everything and we seemed to collectively ignore just how great she is as the unnamed wife of a selfish poet who gives and gives and asks very little of her very rude house-guests (who ignore her anyway).

Sure, “Mother!” is an allegory for the bible, but there wasn’t a more relatable moment this year than Lawrence shrieking at a few uninvited guests (after she had asked politely multiple times) to get off of her sink. IT’S. NOT. BRACED.

Sure, baby Groot is kind of a gimmick to sell toys, but that cute monosyllabic tree still managed to upstage Chris Pratt. Director James Gunn knew just where to use baby Groot, whether dancing with abandon to “Mr. Blue Sky” while his fellow Guardians are fighting a monstrous space alien or spectacularly failing to comprehend a simple plan that would help his friends escape from a locked cell.

Tiffany Haddish stole the whole of “Girls Trip” right out from under her more famous counterparts as the bawdy, take-no-prisoners Dina, but it was that moment with the grapefruit that we’ll never forget. It’s more than a little R-rated when she simulates a sex act with that piece of fruit with such wild-eyed enthusiasm, but thanks to Haddish, it’s hilarious too. Not only that, it made us all learn her name too.