An evening with Gladys Knight 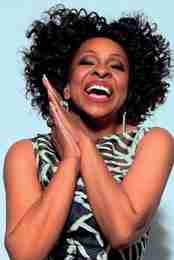 Legendary singer, Gladys Knight, is going strong after more than 50 years in the industry. The 73-year old songstress is a testament to the “black don’t crack,” adage, easily passing for decades younger. Her stage presence also exudes a timeless energy. And that voice.
Fans can bask in Knight’s talent, style and beauty when she performs a one-night only show on Feb. 10 at the Adrienne Arsht Center for the Performing Arts, fittingly in the Knight Concert Hall.
The “Empress of Soul,” is a seven-time Grammy Award winner with number one hits in Pop, Gospel, R&B and Adult Contemporary. Knight has also triumphed in film, television and live performance.
She began performing at the age of four and at sixteen debuted her first album with the classic group formed with her
brother, cousin and close family friend, Gladys Knight & The Pips. The group went on to achieve icon status, having recorded memorable songs such as “Every Beat of My Heart,” “Letter Full of Tears,” “I Heard it Through the Grapevine,” “If I Were Your Woman,” “Neither One of Us (Wants to be the First to Say Goodbye),” “I’ve Got to Use My Imagination,” “Best Thing to Ever Happen to Me” and the number one smash “Midnight Train to Georgia.”

After earning her star on the Hollywood Walk of Fame, Gladys Knight & The Pips were inducted into the Rock ‘N’ Roll Hall of Fame in 1996. Since then, Knight has continued to achieve honors with BET’s “Lifetime Achievement Award” (2004), BET Soul Train’s “Legend Award” (2011) and most recently, the NAACP Image Award for “Outstanding Gospel Album” (2015).
Knight has recorded more than 38 albums over the years, including five solo albums during the past decade, and she remains a tireless performer around the world!
IF YOU GO:
WHAT: Gladys Knight

Previous post Deporting the ‘Dreamers’ will be an unconscionable act