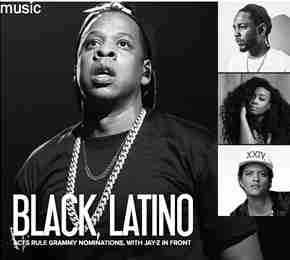 NEW YORK — The Recording Academy sent a clear message when they announced the nominees for the 2018 Grammys: They want to see a black or Latino act have a better shot at winning in the major categories.

Black and Latino musicians dominated in the top four categories, including album and song of the year, giving those acts who perform rap, R&B and Latin music a strong chance at taking home the biggest awards, usually reserved for pop, rock and country musicians, or white artists.

In the past, acts like Beyonce, Kanye West, Eminem and Alicia Keys were leaders in nominations, but would never win awards like record of the year.

This year there is a shift.

Jay-Z, rap’s most powerful force, is the top nominee with eight, the academy announced last Tuesday. Jay-Z’s nominations include album, song and record of the year.

“It’s just time,” said No I.D., who produced JayZ’s entire “4:44″ album and is nominated in the top three categories alongside the rap icon. “I believe that when you really make the best music you can make from your heart, it will transcend all of those stereotypes, color issues, everything, because music is really made for human beings.”

Kendrick Lamar, another artist who has never won album, song or record of the year despite multiple nominations, is also up for the top prize with his third effort, “DAMN.”

Other album of the year nominees include Bruno Mars’ “24K Magic,” Childish Gambino’s “Awaken, My Love!” and Lorde’s “Melodrama,” making the New Zealand singer the only white act up for the prize.

Neil Portnow, the academy’s CEO and president, said the organization took time this year to work hard at diversifying its voting membership, which includes more than 13,000 people.

“You look at the nominations this year and I think that’s clearly a reflection of the fact that we’ve done a lot of good work there,” he said.

The Grammys has a long history of black and Latino artists, as well as rap and R&B acts, losing in major categories despite appearing as the clear front-runner. The organization was criticized earlier this year when Adele’s “25” album won album of the year over Beyonce’s “Lemonade.”

Though Adele’s project outsold Beyonce’s, “Lemonade” was viewed as an artistic, bold and daring project that truly owned the year. Even Adele said Beyonce should have won instead of her.

But, now, Jay-Z’s own work of art may bring the Carters the gold.

Though “4:44” debuted at No. 1, it is not JayZ’s best-selling album nor does it have multiple hits like his past projects. However, his 13th album has been viewed as a brave and personal album revealing stories about his life and showcases that, at 47, he is still relevant and a cultural force in music, where youngsters tend to dominate.

“I’m really happy Jay had the 100 percent courage to really open up and that’s where I think this connection comes from — I think this is a genuine moment that people know in their hearts, like, ‘This wasn’t a trick … this was the opening up of a human being giving us something special,’” said No I.D.

“Despacito,” which earned nominations for record and song of the year, also turned heads when the nominations were announced.

While it is no surprise the song is nominated — it spent 16 weeks on top of the Billboard Hot 100 chart — it is rare to see a song mostly in Spanish compete in major categories alongside English songs at the Grammys.

“The biggest thing for me is being able to break the language barrier. It’s very hard to do. I’m bicultural. I’m Puerto Rican. I was born in the United

States. I know how hard it is for somebody to really just connect to a song when it’s in a different language,” Fonsi said. “That’s what I’m proud of — to be able to celebrate my culture through music and to have people dancing and enjoying it, although it’s not their typical go-to song or language.”

Behind Jay-Z, Lamar scored seven nominations while Mars earned six. Those who scored five nominations were black acts, including Childish Gambino, SZA, Khalid and No I.D.

“When you really make things that really challenge the status quo or challenge issues and you do it artistically and you do it with no fear, people are listening,” No I.D. said. “As much as you act like everything is programmed or calculated or researched or numbers, spins, radio and clubs, it’s still human beings out here you can reach with music.”

The producer said he was “happy” with the nominations. But was Jay-Z?

“Um, yes,” said No I.D., who spoke to Jay-Z by phone last Tuesday. “He’s a cool guy so part of him is always cool, but, you know, we both have been pretty quiet about it all. I think we wanted the music to speak more than (us).”

“I’m speaking today because I am happy. I am happy that (the music) spoke to some people,” he said.