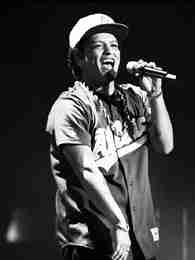 The electrifying special was taped at the legendary Apollo Theater in New York City, where Mars kicked off the primetime show in spectacular style, with an epic performance atop the Apollo’s landmark marquee.

Also, Mars and his band the Hooligans took to the streets, visiting, singing and entertaining locals in exciting, intimate, must-see moments. the special featured exhilarating, never-before-seen stage performances throughout the broadcast.

“For me, Bruno Mars is the greatest performer in the world,” said Ben Winston, who, alongside Mars, served as executive producer. “To be producing his first television special is a true honor. This (was) … a special show and a special night.”

“Bruno Mars is the ultimate live performer of this generation,” said Jack Sussman, executive Vice President, specials, music and live events, CBS Entertainment. “He is the very definition of event television. He burns the roof off the Apollo while paying respect to its tradition and history. We at CBS are proud to be broadcasting his first TV special.”

Mars has sold over 180 million singles worldwide, making him one of the best-selling artists of all time.

Recently, his critically acclaimed and RIAA-certified double platinum album, “24K Magic,” made an impressive debut atop the top digital albums and R&B/Hip-Hop Albums charts, while also remaining in the top 10 for 33 consecutive weeks.

The album and its lead single, “24K Magic,” simultaneously hit #1 on the iTunes Overall Albums and Overall Songs charts during its week of release. The single has since climbed to #4 on the Billboard Hot 100 and has also officially been certified quintuple-platinum by the RIAA. Mars’ quintuple-platinum certified single, “That’s What I Like,” recently climbed to #1 on the Hot 100, marking his seventh Hot 100 chart-topper and his first #1 on the Hot R&B Songs chart, where it remained at the top spot for 19 consecutive weeks.

Mars is the first artist to have two songs spend 24 or more weeks in the Hot 100’s top 5 (“That’s What I Like” and “Uptown Funk”). He is the only artist in the past year to have two quadruple-platinum singles from the same album. Also, Mars is one of the few artists to have written and produced each of his #1 hits and has had a #1 song on the Hot 100 from each of his first three studio albums.

With seven Hot 100 #1s, Mars is now tied with Elvis Presley, Phil Collins and Frankie Valli for the seventh most chart-toppers among male soloists, and he is also ranked #1 among male artists with the most hot 100 #1s for this decade, extending his lead over Justin Bieber, Drake, Eminem and the Weeknd. Mars also took home two BET awards this past June, including the coveted Best Male R&B/Pop Artist Award.

To celebrate his latest album, Mars has been traveling the globe on his massive 24K Magic World Tour, which sold over 1 million tickets in a single day. In 2015, Mars dominated music charts with the hit single “Uptown Funk.” The worldwide smash is the longest-leading Billboard Hot 100 single of the 2010s and is only the 10th single in the Hot 100’s 57-year history to spend at least 14 weeks at #1. “Uptown Funk” took home three Grammy Awards this past year, including record of the year.

Mars returned to the Super Bowl Halftime stage in February 2017 to perform alongside Beyoncé and Coldplay at the super Bowl 50 Halftime Show. In 2014 he made NFL history with the second most watched Super Bowl Halftime Show, which saw a record-breaking total viewership of over 115.3 million, all while being the youngest artist ever to serve as the sole NFL Super Bowl Halftime headliner. The performance gained him an Emmy nomination for Outstanding Short-Format Live-Action Entertainment Program. According to Billboard, Mars scored his first five Hot 100 #1s faster than any male since Elvis Presley.

Mars also has an impressive catalog of 37 Hot 100 hits.