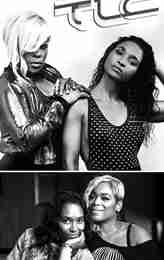 TLC is launching their first new album in 15 years. Photos courtesy of CYBERTLC.WORLD AND BILLBOARD

NEW YORK — For t-Boz and chilli, TLC is a marriage and divorce is not an option.

The top-selling girl group is releasing its final album on Friday. although they don’t plan to record new music, “that doesn’t mean we’re done though. that doesn’t mean we won’t do a residency in Vegas,” t-Boz said.
“We have a body of work and when you (have) timeless songs like ‘Waterfalls’ and ‘no scrubs’ and ‘unpretty,’ you should be able to (tour), you know. the white rock bands do it all the time. Why

“We were in disbelief,” chilli said. “We were so shocked.”

Katy Perry and thousands of fans donated to the project, which thrilled the band. that was in contrast to the reaction the group received when Left eye died in 2002, t-Boz said.

“When Lisa first passed, so many people, especially ones you wouldn’t think would turn on us, kind of counted us out, but her passing didn’t re- ally hinder our ability to sing and dance, and our talent didn’t leave, we just lost a group member,” she said. “so you find your new normal and you put it back together and to see that people believed in us touched my heart the most.”

The group said Queen Bey showed her love to the veteran girl group at the season 10 finale of “american Idol” in 2011.

“this is the first time this ever happened. Like, she just rolled up on us and was like, ‘thank you for everything,’” chilli said.

“‘That was some of the best times of my life’ is what she said,” t-Boz added.

“We were like, ’oh really? never knew that!’
People said that she said stuff like that in interviews, I just didn’t know. … that was like real humbling and just like, ‘Wow, really? OK girl!’” the group also has a fan in rapper J.Cole, and they collaborated on the 2013 hit, “crooked smile.” Cole almost worked on a song for the new album.

“We ran out of time ’cause we would have had a song with J.Cole. … he wanted to do one authentically from scratch,” t-Boz said.

TLC has been known for its loud and outspoken videos, from the futuristic outfits in “no scrubs” to the condom eye patches in “ain’t 2 Proud 2 Beg.”

But they said the video for the no. 1 hit “creep” — the first single on their 1994 sophomore album, “Crazysexycool” — was filmed three times.
“We didn’t like them; scrapped them and started again. … We were like, ’If we come back out, we need to make a statement,’” t- Boz said. “It wasn’t strong.”

then the group watched the video for salt- n-Pepa and en Vogue’s “Whatta man.”

“And Lisa turned (around) … and I remember her going, ’that’s what it should look like,'” re- called t-Boz, imitating Lisa’s squeaky voice. “and then we were like, ‘yeah!’” “It just came together and it was like we evolved into these women instead of these lit- tle girls. We had a little more sex appeal.”

The group also said they shot the video for 1992′s “What about your friends” twice.

When TLC debuted in the early ’90s, the industry was jam-packed with girl groups. today, it’s rarity. Chilli says one of the keys to a successful girl group is not going “into a group knowing that you want to be a solo artist.”

“If you end up going solo that’s fine, but don’t go in there like, ‘I’m just going to use this as my plat- form,’” she added.

Chilli also said things work smoothly for her and t-Boz because they “are exactly identical when it comes to morals and values.”

Pointing to t-Boz, she added: “’cause this one is really shy, even if she’s was just like, ‘I’m not going to tell him’ — it doesn’t matter that’s like hands off. Like forever.”

“’Cause there ain’t no … ‘Well, you married now, so remember your boyfriend?’” t-Boz said. “’cause I know some people who did that publicly. and you do, too.”

TLC said Left eye’s spirit wasn’t just in the studio while recording the new album, she’s around them every day.

“We just incorporate her in everything. the thought is always there, whether you’re recording or not — you can’t forget it,” t-Boz said.

Left eye’s voice — taken from an old interview — is featured on the track “Interlude” from the TLC” album.

“It’s the essence of what you remember her for,” t-Boz said of Left eye’s words.

ED SHEERAN IS ‘NO SCRUB’

Ed Sheeran’s massive no. 1 hit, “shape of you,” recently gave credit to TLC’s “no scrubs” because some said the two songs had similar melodies.

But Chilli and t-Boz said they initially didn’t hear the similarities.

“I’m going to be honest with you: When I heard the song, I couldn’t hear it. I was like, ‘Let me hear it again,’” Chilli said.

t-Boz and Chilli didn’t write “no scrubs,” so they don’t get credit on Sheeran’s track (it went to song- writers Kandi Burruss, Tameka Cottle and Kevin Briggs).

“I didn’t (hear it) either, but they sure went after those publishing checks,” t-Boz said. “I was like, ‘I don’t blame you!’”