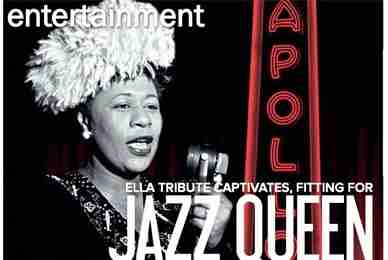 MIAMI – In the year she would have been 100 years old, music lovers’ fascination with Ella Fitzgerald, “The First Lady of Song,” continues to soar. The woman who was the most popular female jazz singer in the country for more than 50 years, was celebrated in a magical show on Nov. 3 at the Adrienne Arsht Center, opening the center’s tenth anniversary of its popular Jazz Roots series.

“It is befitting we launch our Jazz Roots 10th anniversary season celebrating one of the greatest jazz vocalists of all time – Ella Fitzgerald. An exquisite cast of musicians has been assembled for the celebration, which promises to be a most memorable evening of great music on our Knight Concert Hall stage,” said Liz Wallace, vice president of programming at the Arsht Center.

Co-hosts Niki Harris and David Alan Grier lent their spunk, humor and vocal prowess to an evening that was all about Ella. Harris is a vocal powerhouse in her own right, most notably as one of Madonna’s former background singers who has also displayed her considerable talent in collaborations with Whitney Houston, Ray Charles, Mick Jagger, Sheryl Crow and others.

Grier, an actor and comedian, has a surprisingly good singing voice. Readers might remember Grier as one of the ensemble actors on the hit show, “In Living Color.” More recently he starred as the hilarious father on NBC’s “The Carmichael Show.”

The evening’s performers were backed by the amazing Henry Mancini Institute Orchestra from the University of Miami’s Frost School of Music.

The show included a nostalgic touch in that it was produced by Gregg Field, who at the age of 30 toured as Fitzgerald’s drummer. He joined Shelly Berg on piano and Brian Nova on guitar as part of the smoking hot Ella All-Star Quartet.

In a true testament to Fitzgerald’s appeal across generations, 18-year-old Wé McDonald, a finalist on “The Voice,” opened the show by replicating Fitzgerald’s 1934 Apollo appearance.

Although she’d planned to dance in the competition at the famed Harlem venue, Fitzgerald changed her mind at the last minute following an electrifying dance performance by the Edwards Sisters. McDonald’s performance of Hoagy Carmichael’s “Judy,” took the Arsht crowd back to the night 17-year-old Fitzgerald wowed the Apollo audience.

Also on the Jazz Roots show was Brianna Thomas, whom Wall Street Journal music writer Will Friedwald has called “the best young straight-ahead jazz singer of her generation.”

Thomas is a star to watch. Her talent has already taken her to the Montreux, North Sea and Umbria Jazz festivals and venues ranging from the Bahamas to Geneva, Switzerland.

Thomas did not disappoint. Her rich, melodious voice is the perfect instrument to channel Fitzgerald’s roster of hits; scatting effortlessly and beautifully like her idol. When Thomas was joined on stage by jazz veteran Clint Holmes, the marriage of their voices was simply heavenly.

Speaking of Holmes, the man can just plain sing. A true showman, he channeled “Old Blue Eyes,” Frank Sinatra as he performed numbers from his and Fitzgerald’s catalogs.

Fitzgerald is a legend whose music is standing the test of time. She earned 14 Grammy awards, sold over 40 million records and performed at packed venues all over the world before diverse adoring audiences; much like the captivated Arsht Crowd on Friday night.

Next post One Race, Many Cultures: Thanksgiving traditions across the African Diaspora